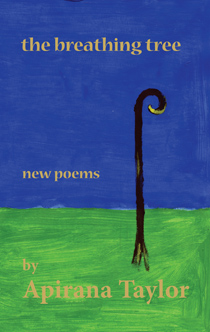 The collection, titled the breathing tree, features 40 new poems. Inspired by nature and mythology, Taylor shifts his focus from the mundane to the mysterious and, with characteristic wit and intensity, shares his delight and despair in what he discovers.

“This collection of poetry builds on much of what I’ve written over the past 40 years.

“It features a wide range of subjects including identity, the negative effects of colonialism, nature, and the importance of trees and breathing as well as some love poetry,” he says.

Taylor, whose verse has been described as “alternately raging and lyrical, dramatic and meditative, haka and haiku”, derives poetic inspiration from anything and everything.

“The inspiration for this poetry comes from the life I see around me and my reactions to it.”

Taylor is a popular and acclaimed poet, short story writer, novelist, playwright, actor, musician, painter and storyteller. He is of Māori and Pākehā descent, with proud affiliation to Ngāti Porou, Te Whānau-a-Apanui and Ngāti Ruanui.

His last collection of poetry, a canoe in midstream, was published by Canterbury University Press in 2009.

About the author:
Apirana Taylor is a poet, short-story writer, novelist, playwright, actor, musician and painter. He travels extensively throughout New Zealand and internationally, and is an engaging performer of his work. Apirana is of Māori and Pākehā descent, with proud affiliations of Ngāti Porou, Te Whānau-ā-Apanui and Ngāti Ruanui.