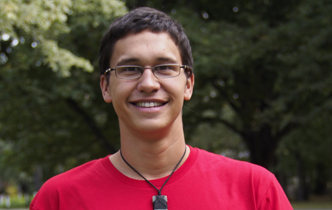 The annual Napkin challenge, which is part of UC’s innovative entre programme run by students to educate students in business development, requires students to submit their business ideas on a small paper napkin.

Simmonds’ idea was to produce a cellphone charger so someone with a flat phone battery could recharge it with someone else’s phone using the piggyback battery booster.

"My idea of the i-Sung charger has potential to become a useful gadget to have on a key ring. I'm just not sure if it's actually possible for power to go out of a smart phone. I haven't got that far yet. But anything is possible.

"This was an exciting competition and I plan to use my engineering degree overseas somewhere. The Engineering Without Borders projects pretty much fit what I want to do in another foreign country.

"My i-Sung charger would transfer battery percentage from one live phone to a dead phone using two retractable wires, adaptable for any smart phone.  It would be super handy if people are out and about and their phone dies but need to use a phone urgently.

"It could be the world’s first charger that doesn't use a powerpoint plug or computer, but essentially turning almost every smart phone into a possible charger.

"The charger would revolutionise the Samsung and iPhone rivalry as we can now not only be friends, but help each other out, one dead battery at a time.’’

Other awards included Most Feasible which went to another engineering honours student, Tim Williams, who came up with an edible popsicle stick.

The most innovative idea was awarded to Timofy Ilin, for a system to transport pet turtles while the funniest idea award went to Lauren Lines who showed a way to decrease lift congestion by giving cookies to people who chose to walk instead of taking the lift.

Later this year students will compete for $75,000 worth of prizes in the annual $75k Challenge.