New Zealand's initial attempt to mitigate the problem of climate change is on its last legs, a University of Canterbury (UC) forestry expert says. 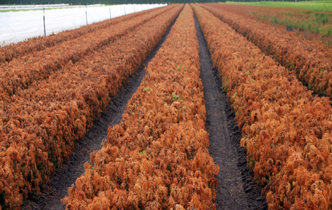 New Zealand’s initial attempt to mitigate the problem of climate change is on its last legs, a University of Canterbury (UC) forestry expert says.

Professor Euan Mason says the Kyoto Protocol, which we ratified in 1997, bound New Zealand to keep its net emissions at 1990 gross emission levels between 2008 and 2012, but also tied the country to particular patterns of thinking about greenhouse gases.

Professor Mason, of UC’s School of Forestry, has seen large numbers of seedlings which were grown in response to our emissions trading scheme and then were recently destroyed with herbicide in a nursery because they went unsold during the 2013 planting season.

"These two-year-old seedlings were grown in anticipation of a well-functioning emissions trading scheme,’’ he says.

"Instead we have an emissions trading scheme which is supposed to do the heavy lifting in New Zealand's climate policy but could not lift one dry Weet-Bix out of its box.

"Forestry could easily make us fully greenhouse gas neutral while solving erosion problems and improving profitability of our hill country farms, but for this we need a rational approach to emissions trading and commitment from our populace.

"Our emissions trading scheme is failing to change behaviour, partly because of low credit prices, and partly because we have taken a piecemeal approach to implementing it.

"Credit prices have dropped because we allow unrestricted imports of hot air credits from eastern Europe.

"The piecemeal approach to our emissions trading scheme, in particular the total exclusion of our agricultural sector, has further reduced its effectiveness and its credibility.

"By excluding agriculture from our emissions trading scheme, we give a free ride to the very sector that emits more greenhouse gas than any other single sector in the country.

"Surprisingly, New Zealand could be completely greenhouse gas neutral between 60 and 100 years by planting radiata pine on approximately 2.4 million hectares, which is nine percent of our land area, or more than doubling our current plantation area of our marginal lands.

"To promote this kind of solution along with reductions in emissions we need a higher credit price, which means no more hot air and all sectors in the emissions trading scheme.’’

Professor Mason says New Zealand has so far failed to respond adequately to climate change and our emissions are among the fastest rising in the world.