In one of the largest field studies of its kind to examine Didymo, or rock snot, a University of Canterbury project has sampled 55 rivers and streams across the South Island. 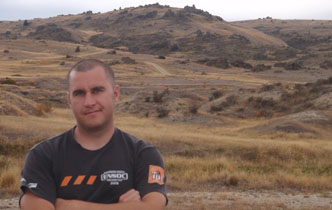 In one of the largest field studies of its kind to examine Didymo, or rock snot, a University of Canterbury project has sampled 55 rivers and streams across the South Island in every major region, to establish its niche and effects on ecosystems.

One of the university’s freshwater ecology PhD student researchers, Jon Bray, says their investigations found that Didymo presents a catch 22 scenario. The Didymo spread seems to have slowed substantially in recent years so for the moment the situation is not getting better or worse, he says.

The 'check, clean, dry' biosecurity campaign may be regarded as successful. It has ensured that over the last 10 years Didymo has still not invaded the North Island despite the presence of suitable habitat.

"Didymo is a lover of clean water and it blooms in response to low levels of water nutrients which is the opposite of what we may expect. Thus its impact is greatest in some of our lowest nutrient or pristine waterways.

"Didymo is then also absent from waterways that are suffering the effects of agricultural practices, but these practices are considered the single biggest issue facing New Zealand freshwater ecosystems.

"Invasive organisms, such as Didymo, are recognised as a major threat to biodiversity globally. New Zealand's ecosystems provide an example of significant documented losses to biodiversity due to invasives. However, globally, freshwater ecosystems are now considered some of the most impacted from the effects of invasives.

"The arrival of Didymo as an invasive freshwater organism within New Zealand garnered significant attention from the media, biosecurity and research scientists. It is a species of algae native to the northern hemisphere and was originally considered rare.

"Now it is rapidly spreading in many temperate regions and forms large cotton wool like masses smothering river and stream bottoms. However, its effects on ecosystems are only noted where it blooms. These habitats are low nutrient, dam and lake-fed rivers where lakes and dams reduce the effect of floods, which removes Didymo.’’

Bray, whose thesis is being supervised by Professor Jon Harding, says while tools to eradicate and manage Didymo have been investigated, prevention of spread is the regarded as the only viable long term policy.

However, Didymo is impacting the South Island’s rivers and streams. Aside from the pervasive effects of agricultural impacts, a number of other freshwater invasives such as the brown trout are thought to have significantly impacted New Zealand's freshwater ecosystems with ongoing effects.

"Generally there is an unfortunate and growing consensus among invasion scientists that within what may be termed the human era, invasion events will continue unabated. Therefore, changes associated with invasives are expected to continue to impact biodiversity and ecosystems,’’ Bray says.

The university’s Freshwater Ecology Research Group is a large research unit within the School of Biological Sciences which is seeking to help protect New Zealand’s freshwater systems. About 95 percent of New Zealand’s natural wetland ecosystems have been destroyed, while a significant number of our indigenous freshwater fish species are under threat.

Many lowland streams, rivers and lakes are not clean. One of our largest lowland rivers, the Manawatu River, was recently described as one of the most polluted rivers in the world. Lake Ellesmere, or Te Waihora, is the largest lowland lake in New Zealand and it has been described as dead, Professor Harding says.