Antarctica was protected from human contact until about a century ago but the threat of biological invasions continues to grow, visiting UK researcher to UC says. 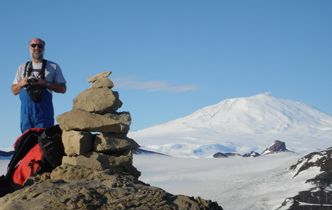 Antarctica was protected from human contact until about a century ago but the threat of biological invasions continues to grow, visiting UK researcher to the University of Canterbury (UC) Professor Pete Convey of the British Antarctic Survey says.

For the last 100 years or so, humans have deliberately and accidentally carried all sorts of organisms around with them on the ice, he says.

In all of Antarctica, there are more than 200 documented examples of ‘alien’ species that are established, mostly on the sub-Antarctic islands, but around 10 percent are further south in the Antarctic proper.

"All known instances are most easily traced to national operations over the last 50 to 60 years, or the previous historical exploitation industries. Tourism is thus far a red herring here but all human movement to the continent carries a risk.

"We think that human assistance is responsible for more than 100 times the number of establishment events over the history of our contact with Antarctica than those linked to natural dispersal and colonisation.

"These numbers may seem low, but in the context of native diversity, on some sub-Antarctic islands there are as many species of introduced plants and invertebrates as there are native ones, this is a big biodiversity impact and threat in terms of the Rio Convention priorities, especially as much of the native Antarctic biology is unique.

"In parts of the Antarctic these numbers are now increasing more rapidly. In some parts this is compounded by climate change making conditions less extreme, meaning even more species could have the ability to transfer and survive.

"We are all aware of the impact of large grazing and predatory mammals and in reality new introductions of these are very unlikely, but plants and insects/invertebrates/microbes can be just as much a threat to Antarctic ecosystems, which are often unable to tolerate new competition or predators.

"A proportion of these invaders are likely to become ecosystem engineers, fundamentally or irreversibly changing the way that sub-Antarctic and Antarctic ecosystems work.

"Antarctica NZ's biosecurity education and procedures are amongst the clearest and best currently applied anywhere in Antarctica, and are looked at as a model by other countries.

"Also worth noting is that the main continent of Antarctica remains virtually unaffected by biological invasions but we are looking at future risk.

"This is the last chance we have to demonstrate that we can sensibly and effectively manage the threat of biological invasions at continental scale before they actually happen. This is now impossible with all other continents and significant landmasses globally.’’

Professor Convey is an Erskine visitor to UC. The Erskine Fellowship programme was established in 1963 following a generous bequest by former distinguished UC student John Erskine.

Through UC's Gateway Antarctica Professor Convey will give a public lecture on invasions in the Antarctic at UC on Thursday, January 16.