Feasible to repair and strengthen buildings

There could have been a different outcome for heritage and for Christchurch if there had been a recognition early on that it was feasible to repair and strengthen buildings. 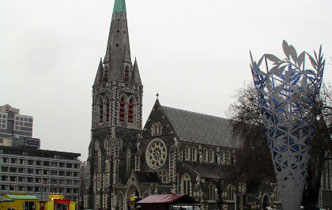 There could have been a different outcome for heritage and for Christchurch if there had been a recognition early on that it was feasible to repair and strengthen many heritage buildings than has been the case, a University of Canterbury (UC) architectural historian says.

Associate Professor Ian Lochhead says that if building owners who were keen to retain their buildings had been allowed to do so, there would have been much more happening within the city than is currently the case at the moment.

"We would have been much further down the path towards recovery. To date, 235 listed heritage buildings have been demolished, with further demolitions expected to occur in the near future,’’ Professor Lochhead says.

"Among those buildings whose future remains uncertain are some of New Zealand's most significant buildings, including Christ Church Cathedral and the Cathedral of the Blessed Sacrament.  Other heritage buildings currently threatened include the Public Trust Office (1923) and the Majestic Theatre (1930).’’

Historic Place Trust category one buildings that have been demolished to date include the former CSA Gallery (1890), the Armson Woolstore (1881) and the Press building (1909).  This does not include buildings like the Provincial Council Chamber, the Timeball Station and the Durham Street Methodist Church which failed catastrophically.

The buildings of the Arts Centre, the Canterbury Museum and the former Government Buildings (Heritage Hotel) are major heritage successes. The Town Hall is a listed heritage building and its restoration and strengthening is also a major modern heritage gain.

"There is a growing awareness that demolitions of heritage buildings have gone too far and there is a realisation that many more could have been saved. The Canterbury earthquakes have been, without doubt, the single greatest disaster for heritage buildings in New Zealand's history.

"Clearly, there is a need for seismic strengthening of heritage buildings to become a matter of national priority,’’ Professor Lochhead says.