In March 2010, Christchurch's Avon-Heathcote estuary experienced a huge (90 percent) reduction in nutrient input resulting from the diversion of wastewater to an ocean outfall 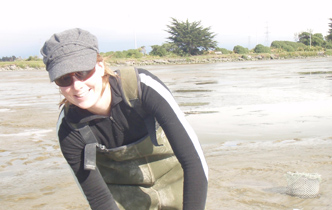 In March 2010, Christchurch’s Avon-Heathcote estuary experienced a huge (90 percent) reduction in nutrient input resulting from the diversion of wastewater to an ocean outfall, extending 3km offshore from South Brighton Beach.

Prior to the diversion, large quantities - up to 500,000 cubic metres a day - of treated wastewater had been released into the estuary.

The Avon-Heathcote estuary nutrient levels were high due to the input of treated sewage over the past 50 years or so. Sewage has high amounts of nitrogen, particularly ammonium, and phosphorus. These high nutrient levels degraded the estuary.

The diversion was one of the largest and most expensive (about $89 million) ever done in New Zealand and was expected to initiate a major ecological recovery to this nutrient-rich estuary.

A University of Canterbury marine ecology PhD graduate, Dr Jen Skilton, did her thesis examining the impacts of the wastewater diversion and subsequent earthquakes on the ecology of an estuarine ecosystem. Dr Skilton, whose Avon-Heathcote estuary work was supervised by leading marine ecologist Professor David Schiel, completed her PhD last year.

"In 2011, Christchurch was struck by a series of large earthquakes that greatly changed the estuary. Massive amounts of liquefied sediments, covering up to 65 percent of the estuary floor, were forced up from deep below the estuary, which was tilted upwards half a metre on one side and dropped a similar level the other side.

"This resulted in large quantities of raw sewage from broken wastewater infrastructure entering the estuary for up to nine months. My study became a world-first test on the potential effects of nutrient reduction and earthquake disturbance on the invertebrate communities, habitats and food dynamics in estuaries.

"The major conclusions of this study were that the large quantities of clean and unpolluted new sediments introduced to the estuary during the earthquakes altered the recovery trajectory of the estuary, accelerating it at least throughout the duration of this study.

"This was largely through the capping effect of the new liquefied, coarser-grained sediments as they dissipated across the estuary and covered much of the old organic-rich eutrophic sediments. The wastewater diversion had a major impact on the marine food dynamics,’’ says Dr Skilton, a former Nelson College for Girls.

Her research gives valuable insight and advancements in the scientific understanding of the effects that the diversion of wastewater and large-scale disturbances can have on the ecology of a soft-sediment ecosystem.