UC geography academic Professor Eric Pawson has been awarded the University of Canterbury's Teaching Medal for 2013. 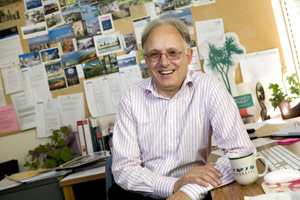 UC geography academic Professor Eric Pawson has been awarded the University of Canterbury’s Teaching Medal for 2013.

Professor Pawson (Geography) has a long track record of teaching excellence at the University during his more than 30 years at UC. He has previously been recognised with both a University Teaching Award and an Ako Aotearoa Nation Tertiary Teaching Excellence Award.

Professor Pawson says there are many highlights in a job such as teaching.

“One of the things I love about my job is being actively engaged. I enjoy the continuing sense of discovery and that there is always the potential to do things differently, to do things more effectively and to learn things in new ways,” he says.

Professor Pawson has and continues to make a significant contribution at both UC and at a national level through his involvement in pan University working groups and his role as an auditor for the Academic Quality Agency for New Zealand universities.

He was awarded the medal in recognition of his outstanding leadership at both the institutional and international level in learning and teaching development and nationally in quality assurance.

Professor Pawson is respected and supported by his peers within the Department of Geography and the University, the local Canterbury community, and in the national and international context of his research and teaching.