A University of Canterbury student is proposing a grocery shopping outlet that allows Canterbury farmers and growers to sell their goods direct to the customer, seven days. 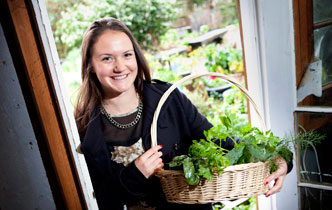 A University of Canterbury student is proposing a grocery shopping outlet that allows Canterbury farmers and growers to sell their goods direct to the customer, seven days a week.

The hunters and gatherers scheme would allow Cantabrians to buy their groceries from the butcher, the baker and the fruit and vegetable shop all under one roof, knowing that it has come to the shelves directly and can be traced back to their origin.

The proposal has been developed by fifth year commerce and honours law student Kate Austin as part of the annual $75,000 Entre business competition.

Entre is a student-founded ideas competition that sees young hopefuls put their business ideas to the test with the help of mentors and business connections. Guest judges include Icebreaker innovator Brian Brackenridge.

"I’m looking at a trendy and architecturally-designed site which provides an experience for grocery shoppers complete with an onsite café,’’ Austin says.

"The architecture and idea is inspired by the Torvehallerne Markets in Copenhagen and other European food outlets.

"I was also inspired after watching my father pull out his pear orchard as he could no longer sustain the business on the prices he was offered from the large suppliers.

"Over the last three years in Wanganui probably over 90 percent of pear orchards have been pulled out – a big number considering Wanganui was in the top three regions for pear production.

"My father turned to sell the pears at local markets all over the North Island from which he had a great response. The produce market trend is booming in New Zealand at the moment. The weekend Riccarton Bush markets are a great example of the importance Cantabrians place on fresh food and local produce.

"It will be an exciting feature of the Christchurch rebuild, perhaps providing a food hub in the city. Currently there isn’t one but Auckland has a great market at Britomart. Benefits to the hunters and gatherers scheme include convenience, quality, fresh and local produce and a shopping experience."

Austin says the Hunters and Gatherers company would supply a space for a number of outlets and farmers to provide fresh produce under one roof, with one checkout, in a trendy indoor space together with a cafe for shoppers. Butchers, bakers, fishermen and growers would provide product for the market along with fresh locally produced dairy products.