A University of Canterbury (UC) anthropologist has been investigating the cultural economics of commercial food waste and Dumpster-diving. 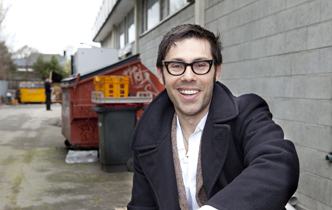 A University of Canterbury (UC) anthropologist has been investigating the cultural economics of commercial food waste and Dumpster-diving.

Dr David Boarder Giles has worked with Dumpster-divers and the food recovery group Food Not Bombs in a bid to reduce waste and hunger in Seattle, Washington, and several other cities.

Up to a third of the food produced globally is wasted, he says, and most of this waste occurs in industrialised nations. In the United States, for example, over a quarter of all the food produced is discarded before it has spoiled.

"I've already been in touch with Food Not Bombs members, Dumpster-divers and other food activists in Christchurch, Wellington and Dunedin, who seem to be describing much the same situation as I found in Seattle in terms of waste. I'll be doing more research about this in the coming months,” he says.

Most waste is produced by consumers, whose rate of food waste has increased progressively over the last three decades. But, in addition, a significant amount is wasted by retailers.

This is not because there is no market for the food. Almost 15 percent of American households have inadequate access to food. Rather, Dr Giles’ research has found that the market economy is based on significant inefficiency and waste.

"My work has investigated cultural factors that determine the economic value of things—especially food,’’ he says.

"Consumers often relate to food primarily not as a resource but as a commodity. Commercial dumpsters are full of food which is still perfectly edible, but which cannot be sold for a set price: cartons containing eleven perfect eggs and one cracked one; day-old loaves of bread; slightly bruised fruit; pre-packaged items that are too close to their best-by date.

"Consumers often purchase groceries and other goods based on aesthetics rather than nutrition or taste. Sell-by dates contribute to a significant amount of food waste: while these dates are usually very conservative estimates, customers often lack the specialised skills and knowledge used by previous generations to judge the quality and safety of their food themselves, and so come to rely on these dates.

"Retailers often opt to turn over their shelves more quickly, rather than to sell old stock at a discount. To the extent that customers are willing to pay a significant premium for newer, more expensive goods, it may often be more profitable to simply throw older goods away than to minimise waste.

"Dumpster-divers are recovering commercial food waste and redistributing it. These efforts vary widely, with formal charities often obliged to redistribute the waste in places that don’t disrupt local commercial interests, keeping hungry people and wasted food segregated from the mainstream economic activity which produces the waste in the first place,’’ Dr Giles says.