UC graduates James Robertson, Sam Davies Talwar and Guy Horrocks are in the finals of the New Zealand Hi-Tech Awards which will be presented in Auckland on Friday night. 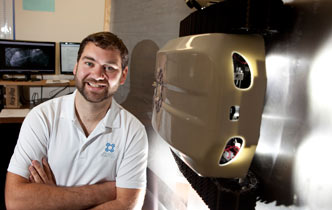 Three University of Canterbury (UC) graduates - James Robertson, Sam Davies Talwar and Guy Horrocks - are in the finals of the New Zealand Hi-Tech Awards which will be presented in Auckland on Friday night.

The trio are among four finalists in the New Zealand Hi-Tech Young Achiever Award.

Horrocks is co-founder of the world’s first iPhone app company, Polar Bear Farm. Based in New York, he received attention from Apple and helped pioneer the jailbreak market a year before there was a mobile app store. Horrocks worked on the 2012 US Elections with CNN and TIME Magazine.

In 2008 he led a student team in the  development of an automated metrology system for Methanex Ltd and was a founding member of Engineers Without Borders New Zealand, which he went on to lead.

Koti Technology is helping to commercialise a ceramic coating system that may some day be part of the NASA spacecraft programme.

Invert Robotics has invented wall-climbing inspection robots. The company was created through a partnership between the University of Canterbury (UC) and powerHouse Ventures which plans to make high-value businesses from university research.

Invert Robotics also won the annual ANZ Flying Start Business Plan supreme award and the New Zealand Hi-Tech Start–up of the Year Award. The wall-climbing robots are the only ones in the world that can be used to inspect stainless steel structures in an industrial environment outside a lab.

Christchurch company ARANZ Geo is a finalist of the Hi-Tech Exporter of the Year Award category. ARANZ Geo was started some years ago by UC staff.

UC spin out company, Veritide, is a finalist in the Pre-Commercialisation Company of the Year Award. Last year Veritide was named one of Deloitte’s Fast 50 top five rising stars in New Zealand.