University of Canterbury researchers have found that that feral cats, stoats and hedgehogs are likely to be the biggest threats to ground-nesting New Zealand falcons. 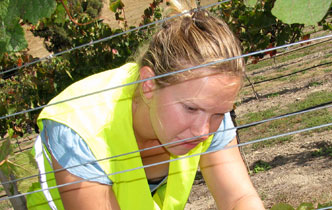 University of Canterbury researchers have found that that feral cats, stoats and hedgehogs are likely to be the biggest threats to ground-nesting New Zealand falcons.

The New Zealand falcon is a nationally threatened species. Populations have been shown to be in decline and are likely less than 4000 breeding pairs.

UC biology researcher Dr Sara Kross says the research, supervised by Dr Ximena Nelson, is the first confirmed indication of which predators are likely to be an issue for falcons.

"Previous studies have only been able to use field signs to identify predators at failed nests which is relatively inaccurate. The data from our research is the first to identify potential predators using video and artificial nests,’’ Kross says.

The falcon was voted the native New Zealand bird of the year. It can reach speeds of up to 230kmh and catch prey mid-flight.

The UC research, seeking to help guide the reintroduction of the birds into low-lying country such as vineyards, was supported by Brancott Estate Wines and Canon New Zealand. Te Papa Museum assisted Dr Kross in identifying predator teeth marks on wax eggs.

"Stoats and hedgehogs are likely to be the main predators among introduced pests of falcon eggs.  Nests in the hills were attacked by predators faster than in the vineyards.  Our results indicate that vineyards hold considerable potential for the protection and conservation of falcons.

"These results demonstrate the important implications of habitat type on pressure associated with introduced predators. These may well prove a fruitful avenue of management if breeding can be fostered in safer vineyard areas, as in the case of this threatened falcon.

"Nowhere is the detrimental impact of these introduced species more apparent than in New Zealand, where pests have been implicated in the decline of most of the 58 native bird species that have become extinct since the arrival of humans.

"To reduce the impact on agricultural activities and increase the biological value of land being utilised, we are aiming to establish a population of falcons in the Marlborough vineyard- dominated valleys of the country’s largest wine-growing region.

"Falcons can provide ecosystem services for vineyards in the form of pest control and they exhibit more attention to their nests,’’ Kross says.

Dr Kross is programme manager for the Marlborough Falcon Conservation Trust, a charitable trust she co-founded during the first year of her thesis. She has recently been awarded a postdoctoral position with the Smith Conservation Research Fellows in the United States.