New Zealand's biggest testing of a concrete bridge will take place at the University of Canterbury over the next two days. 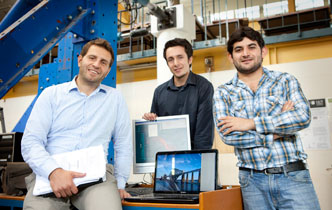 New Zealand’s biggest testing of a concrete bridge will take place at the University of Canterbury over the next two days.

Dr Alessandro Palermo says building of bridges since the 2010 and 2011 earthquakes have changed significantly. The rebuild of Christchurch will involve huge labour and big construction companies like Fletcher and Fulton Hogan who are starting embrace new methods based on accelerating bridge construction (ABC).

Prefabrication of bridge elements are now being made in an off-site factory. The bridge parts are transported to the construction site for the assembly.

This allows the bridge to be constructed within a few weeks or even days, compared to the traditional cast-in-place construction which can take several months.

"Prefabricated bridges have been used in areas of low seismicity since the 1990s, in countries such as the USA and Taiwan. In the USA, prefabrication of bridges has become common and in some states, such as Texas, prefabrication is now the preferred construction method for highway bridges.

"Prefabricated bridges are not yet in use extensively in areas of high seismicity due to uncertainty of the seismic performance.

"The specimen to be tested at Canterbury weighs more than 22 tonnes. It will be loaded with an additional 60 tonnes to simulate the weight of the bridge deck it will support.

"The specimen will then be pushed to failure point in order to assess its seismic performance for extreme earthquake events. The test will be a world-first at an international level as the concept was only proposed in 2011 by the National Co-operative Highway Research Programme in the USA but has not been tested at this scale with multiple columns."

The testing today is part of the ABC research project funded by the Natural Hazards Research Platform and supervised by Dr Palermo. A UC engineering student, Mustafa Mashal, is doing his PhD on the project and is in charge of testing.