UC Emeritus Professor Roy Kerr heads to Europe next week to become the first New Zealander to receive the Einstein Medal from the Albert Einstein Society in Switzerland. 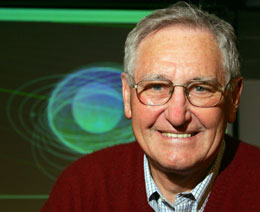 University of Canterbury Emeritus Professor Roy Kerr heads to Europe next week to become the first New Zealander to receive the Einstein Medal from the Albert Einstein Society in Switzerland.

The Einstein Medal will be awarded to Professor Kerr at a ceremony at the University of Bern on 28 May.

Professor Kerr discovered a specific solution to Einstein's field equations which describes a structure now termed a Kerr black hole. He has made other significant contributions to general relativity theory, but the discovery of the Kerr black hole was so remarkable as to compare with the discovery in physics of a new elementary particle.

With over 100 million trillion black holes in the observable universe, his achievement has been of crucial importance for science.

The Kerr Solution has come to be regarded as the most important exact solution to any equation in physics and has been pivotal in understanding the most violent and energetic phenomena in the Universe.

The Einstein Medal is awarded annually by the Einstein Society which is based in Bern, Switzerland, where Einstein completed his revolutionary work in the first decade of the 20th century.

The Einstein Society works with the University of Bern to preserve Einstein's legacy in Bern and Switzerland through different activities and, in particular, by annually awarding a medal "to deserving individuals for outstanding scientific findings, works, or publications related to Albert Einstein".

"I'm not sure how helpful my award will be for UC but if there are any spinoffs because of it, I will be more than happy. It’s a great university," Professor Kerr says.