Expert to talk about captive elephants

Erin Ivory, one of the world's leading experts on zoo elephants, will talk about the care of captive elephants at the south and Southeast Asian elephant conference. 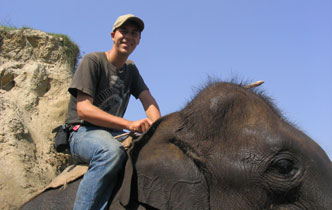 Erin Ivory, one of the world’s leading experts on zoo elephants, will talk about the care of captive elephants at the south and Southeast Asian elephant conference on the University of Canterbury campus next week.

Conference organiser, UC anthropology lecturer Dr Piers Locke, says Ivory will outline the controversies that have raged for decades concerning the care of captive elephants at the May 7 and 8 conference.

Dr Locke was the first anthropologist to live with elephant handlers in order to explore people’s use of elephants and expert knowledge and the professional practice of their keepers.

He has looked into ways in which captive elephants are involved with ecotourism, protected area management and biodiversity conservation.

Dr Locke says conflicts between elephants and people due to habitat loss and population pressure is an acute problem, often resulting in mortality for both people and elephants.

"The loss of traditional forms of employment, particularly in logging, has resulted in welfare problems not just for elephants, but also for their handlers. Both of these issues present a challenge for how the two species can share space and live together.

Surendra Varma, of the Indian Institute of Science, will be a key speaker at the two day conference. Varma has conducted extensive surveys of captive elephants in India, in zoos, circuses, forest camps, in private ownership, and at an ancient livestock fair in Bihar where elephants can still be bought and sold.

A world-leading Asian elephant ecologist Professor Raman Sukumar will give the keynote address. Professor Sukumar, also from the Indian Institute of Science, will outline the future possibilities for captive and wild elephants.

Asia’s elephant population has experienced a 90 percent decline in the past 100 years and a rough calculation suggests that as much as 95 percent of the original habitat has been lost over the same period. As few as 25,000 Asian elephants remain in the wild, scattered among 13 countries.