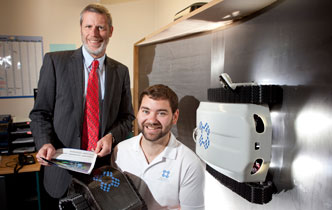 Invert Robotics was founded as a result of research performed at the University of Canterbury (UC), the intellectual property for which was subsequently licensed from UC.

"The accuracy of our inspections gives our customers confidence in the condition of their equipment and allows them to better plan maintenance activities by quantifying problems more precisely than has previously been possible. Combined with the safety benefits of not sending anyone into the equipment our robotic inspections are pretty compelling,’’ Mr Robertson said.

Earlier this year Invert Robotics won the New Zealand Hi-Tech Star-up Award for its robot which is the only one in the world that can be used to inspect stainless steel vessels in an industrial environment, outside a lab.

Other climbing robot technologies exist but are either too sensitive, complex or expensive to be practical, Mr Robertson said.

Meanwhile, Invert Robotics have been running trials at Fonterra’s Kaikoura plant as they fine-tune and improve the service and capability of their cutting-edge robot which is also able to film as it travels, which means the footage can be replayed for more thorough checking.

"Just recently we demonstrated our first generation inspection the robot to Fonterra by scrutinising a powder dryer and they were impressed by the safety and accuracy of our inspections.

"We are fully focused on providing the best service we can to the dairy industry. Down the track we plan to look into petro-chemical processing and storage, mining, food processing, fermentation and pharmaceuticals.

"We have had lots of interest from construction and service companies in Australia, Asia, the USA and throughout the Middle East. There is a worldwide trend towards safer work practices and it is a no brainer to remove people from hazardous areas.’’

Mr Robertson said their next goal was to scale up operations and fill their inspection schedule. They were limited to a few months of maintenance window each year so it was important for Invert Robotics to do as many inspections as possible when they got the chance.

They have patents pending surrounding climbing robots and the adhesion mechanisms for them that they have developed either in-house or at UC.

"It's been great working with UC and in particular their staff at research and innovation. We've worked closely over the past three years identifying a customer need and working together to try and develop a solution. Our recent milestone of being paid to do an inspection is testament to the hard work of lots of people at Invert, UC and many other organisations over that time.’’