Microscopic life from the ocean and land can now be seen by many for the first time in a ground-breaking series of 3D books created by the University of Canterbury's Dr Kerry Swanson. 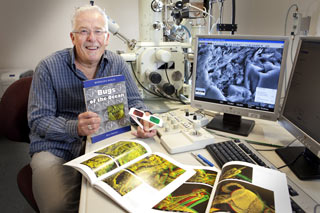 Microscopic life from the ocean and land can now be seen by many for the first time in a ground-breaking series of 3D books created by the University of Canterbury’s Dr Kerry Swanson.

Dr Swanson (Geological Sciences) has written three books dedicated to bringing alive specimens from the biological world, including bugs, plants, fungi and fossils that jump out of the page at the reader who wears 3D glasses provided with each book.

The revealing images are made possible using one of the country’s most powerful scanning electron microscopes, which is located in the University’s Department of Mechanical Engineering.

Dr Swanson, who has spent 20 years gathering the organisms from Australia and New Zealand, said he wanted to use the 3D images to get young people excited about science and to reveal the beauty of the microscopic world.

“I showed my daughter a 3D image of a microscopic crab-like animal I was studying about 20 years ago. She was nine years old then and her reaction was of such excitement and amazement that I realised there would be huge potential to create a book so everyone could enjoy the images,” he said.

“I began my first version of the books back then but when the new microscope was installed at the University five years ago I was encouraged to finish the books by successive heads of my department and Professor Milo Kral in Mechanical Engineering. I have been working solidly on them for that time and then the pressure really came on when the earthquakes struck.”

Dr Swanson has also presented a series of themed lectures, which used some images from the books, to more than 2000 people including school children, community groups, adolescents and adults over the last three years.

“When there is a gigantic spider up on a cinema-sized screen in 3D that seems to literally jump out at the crowd, you can hear a collective gasp in the audience,” he said.

“The reality is I take it for granted what I’m seeing each time I fire the microscope up, but by doing these books I hope I can share some of the fascinating things I have seen with many more people.”

Dr Swanson said he also wanted to make people aware of the threat many organisms faced, particularly in the ocean.

“Many species are disappearing and the rate at which they are being lost is alarming. From my perspective, the smallest organisms are as important, if not more so, than some of the larger endangered species that seem to have so much emotional appeal. What we need to do is make individuals aware of the beauty and importance of microscopic life and I think the best way to do that is through images.

“I want people to look at these pictures and be amazed. Once they are amazed hopefully they will want to learn more about many of the things covered in each volume.”