We Could be Heroes: The gods and heroes of the ancient Greeks and Romans 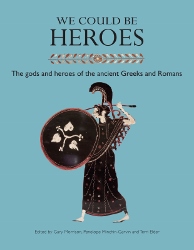 Zeus – or Jupiter in his Roman manifestation – could shake Mount Olympus with the nod of his head, and send thunder and lightning across the heavens. Perseus was given winged boots with which he could fly. The gods and heroes of the Greeks and Romans were powerful. Yet they were also complex, subject to human emotions and relationship troubles. The 87 artefacts and eight essays in this richly illustrated catalogue offer an insight into their complex world, a world that is in some ways familiar, but in others very distant from our own.

We Could Be Heroes celebrates the stories of their adventures, disputes, conflicts and love interests and is published to accompany the inaugural exhibition at the Teece Museum of Classical Antiquities in 2017. Many beautiful, rare and valuable artefacts are on display in this first significant exhibition of the Logie Collection after the devastating Canterbury earthquakes of 2010 and 2011. The exhibition also marks the return of the University of Canterbury to its first home in the Christchurch Arts Centre, the original site of Canterbury College.