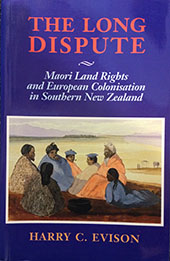 An account of what happened when the southernmost corner of Polynesia became the most distant outpost of European colonisation. A revised and condensed edition of the award-winning Te Waipounamu: The Greenstone Island.

"The publishers are to be congratulated on the production (and the price) of the book. A section of excellent illustrations, a fourteen-page bibliography, thirty-three clear and detailed maps and a glossary of Maori terms combine to set a standard that academic presses elsewhere might take as a benchmark." English Historical Review

"The author writes with great authority and gives a vivid picture of colonial events that led to later grievances." Otago Daily Times

"Sometimes a book comes along which has the ability to change the way people think. This is one of those books." Southland Times

Harry Evison assisted Ngai Tahu with their historic claim before the Waitangi Tribunal. In 1996 he was awarded the honorary degree of Doctor of Letters by the University of Canterbury.