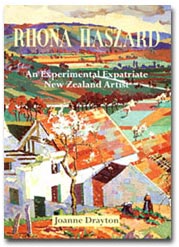 During Rhona Haszard's short life she distinguished herself as a "New Woman" whose social and sexual behaviour was highly controversial. She worked as an artist on the Channel Island of Sark, in France, Alexandria and London. She dressed eccentrically, recommended Radclyffe Hall's lesbian novel The Well of Loneliness, spoke positively of de facto relationships and advocated vegetarianism and unprocessed food. Most significantly, she wanted to paint innovatively and professionally.

Born in Thames in 1901, Haszard studied at Canterbury College School of Art and worked with fellow students Ngaio Marsh, Evelyn Page, Rata Lovell-Smith and Olivia Spencer Bower. Even in this talented company she established a promising reputation. A successful future seemed assured by her marriage in 1922 to Ronald McKenzie, but her traumatic elopement with Englishman Leslie Greener seemed to threaten it all. Escaping with Greener to France in the 1920s, her brighter, Post-Impressionist style rapidly brought international recognition, and in London she participated in a number of significant exhibitions. Her life was tragically cut short at the age of thirty.

Joanne Drayton graduated from the University of Canterbury with a PhD in 2000. She is the author of Edith Collier: Her Life and Work, 1885-1964 (CUP 1999), and curated an exhibition of Collier's work that toured the country. More recently, in association with the Hocken Library, she has curated Rhona Haszard: An Experimental Expatriate Artist, which will tour New Zealand's major galleries between August 2002 and April 2005.