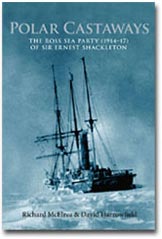 When Sir Ernest Shackleton's dream of crossing Antarctica foundered with his ship Endurance in the ice of the Weddell Sea in October 1915, he doubtless wondered how this would affect his support party on the other side of the continent. He could not communicate with them and tell them no longer to proceed.

The task of the Ross Sea party was to lay the vital depots to support Shackleton's traverse party. Theirs was a hard task. They were under-financed, inadequately prepared - and unlucky. In May 1915, shortly after arriving at Cape Evans on Ross Island, their ship Aurora was blown out to sea from its moorings, and drifted in ice for nearly a year before it could be freed. Ten men were left ashore, completely isolated from the outside world, and without proper equipment and supplies. Notwithstanding, they remained true to their responsibilities and laid depots across the Ross Ice Shelf to Mt Hope, but at great personal hardship and cost.

Remarkably, after some 85 years, this book is the first in-depth account of the Ross Sea Party, the drift of the Aurora and the relief expedition under the command of polar veteran Captain J. K. Davis. The book fills one of the last major gaps in the literature of the 'heroic era' of polar exploration. It has been written almost entirely from primary sources and includes a number of photographs never previously published, as well as maps and other illustrations.

David Harrowfield was formerly Antarctic Curator at Canterbury Museum, Executive Officer of the Antarctic Heritage Trust and Research Officer, Antarctic, at the International Antarctic Centre in Christchurch. He has made numerous visits to Antarctica and has published widely on conservation of historic sites. He now runs South Latitude Research Ltd and is a member of the Antarctic Heritage Trust Conservation Advisory Group. In 1995 he was awarded a Winston Churchill Memorial Trust Fellowship to study historic site preservation in the Arctic.

Both authors have undertaken detailed research on this expedition over more than ten years. They have interviewed and corresponded with veterans since deceased, and undertaken field work at the historic sites in Antarctica that feature in this book.