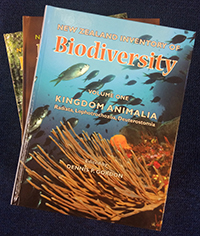 New Zealand is the first country to have compiled a checklist of its entire living and fossil biota.

This trilogy provides a review and inventory of New Zealands's entire living and fossil biodiversity - an international effort involving 238 New Zealand and overseas specialists and the most comprehensive of its kind in the world. Together, the three volumes list every one of the approximately 56,120 living and 14,700 fossil species of New Zealand's plants, animal, fungi and micro-organisms.

These volumes are affiliated with Species 2000, an international scientific project with the long-term goal of enumerating all described species on Earth into one seamless list - the Catalogue of Life, a kind of online biological telephone directory.