Looking for Answers: A life of Elsie Locke 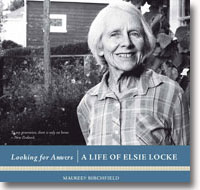 Writer and activist Elsie Locke was a remarkable woman whose contribution to Aotearoa New Zealand went largely unrecognised during her lifetime.

In a long and eventful life she campaigned for birth control, women’s rights, nuclear disarmament, social justice and the environment before such causes were popular.She wrote almost 40 books, numerous articles and School Journal stories, and was a published poet.

Forthright she might have been, but the diminutive Elsie Locke was a very private and modest person.In this insightful and compelling biography, Maureen Birchfield peels back the layers of the public firebrand to find an ordinary woman who negotiated enormous personal obstacles to raise four children while striving tirelessly to improve the world around her.

Recently declassified security files confirm that the New Zealand Security Intelligence Service (and its antecedents) had Elsie firmly in their sights, particularly while she was a member of the Communist Party of New Zealand (1933–56). Incorporating information from these files, Maureen Birchfield delivers a fascinating portrait of a woman ahead of her time.

This is a brilliant biography...beautifully produced...all in all this is a fascinating story.' Margaret Long, Oral History in New Zealand

'...an intriguing, beautifully presented publication documenting the rich and complex life of an influential, forward-thinking person.' In Print

Maureen Birchfield's life has involved both paid and unpaid work, the latter in such organisations as the Society for Research on Women, the Women’s Electoral Lobby, the National Oral History Association of New Zealand and the Trade Union History Project. She trained as a teacher in the late 1950s and taught at all levels, from primary to tertiary, and later worked as an adviser to Massey University’s extramural students. Redundancy from her position as Tutor/Organiser for the Workers’ Educational Association (WEA) in Wellington as a result of government cuts enabled Maureen to complete a book about her mother,  She Dared to Speak: Connie Birchfield’s story (Otago University Press, Dunedin, 1998). Maureen and her husband Barry Williams live in Paekakariki on the Kapiti Coast. They have three children and three grandchildren.