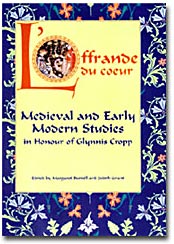 Emeritus Professor Glynnis Cropp retired from Massey University, New Zealand, at the end of July 2001 after a career as lecturer, reader and professor of French. She is one of the foremost scholars in the world in medieval French and Occitan studies, and a specialist in the writings of Christine de Pizan and in the medieval adaptations of Boethius' Consolatio Philosophiae.

This collection of essays has been offered by colleagues who have enjoyed working with Glynnis Cropp on her various projects during her career. They include Liliane Dulac, Angus Kennedy, James Laidlaw, Peter Ricketts, Brian Merrilees, Nadia Margolis, Roy Rosenstein, Keith Atkinson, Maxwell Walkley, Denis Drysdale, Alison Hanham and Roger Collins. The title of this collection comes from a medieval tapestry now in the Musee de Cluny in Paris. Like the gentleman offering his ruby heart to the seated lady, these essays are offered with homage, respect and affection. The editors of this collection have been colleagues of Glynnis in medieval French studies in New Zealand.