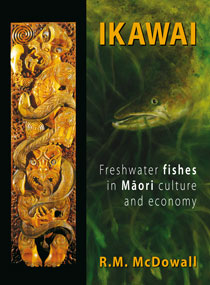 This landmark publication draws together all that has ever been written about the role of freshwater fishes in the lives of early Maori.

Species such as tuna (eels), kanakana (lamprey), inanga and kokopu were of high importance in the traditional diets of Maori, who were well aware of the places and seasons in which these fish could be harvested.

Bob McDowall made it his life’s work to read every word ever written on the subject of Maori fisheries, from passing references in explorers’ diaries, to the significant literary achievements of Elsdon Best and Te Rangi Hiroa in the 1920s, to the recent reports of the Waitangi Tribunal.

In Ikawai, all the knowledge on record is connected into a coherent account for the first time, and interpreted in the light of modern scientific knowledge of the fish fauna.

As well as being highly informative, Ikawai also serves to illustrate the beauty associated with Màori fisheries.

Bob amassed an extraordinary collection of photographs of the fish themselves, of the artefacts Màori customarily used in catching fish, and of artworks by modern Maori practitioners, some reflecting the many legends and stories associated with fish. He also unearthed some stunning and highly significant historical images that were hidden away in archives, libraries and photographic collections.

This compendium is an essential resource for anyone interested in the lives and livelihood of New Zealand’s earliest settlers.

'All up, Ikawai is an incredibly valuable book, collating information from an enormous variety of sources that would otherwise have been largely inaccessible.' Ian C. Duggan, Australian & New Zealand Environmental History Network

R. M. (Bob) McDowall wrote widely about this fish fauna from the 1960s onwards, and several of his books are standard reference works. In addition, he wrote extensively for the lay reader. He was for many years Manager, Freshwater Fisheries, in the Ministry of Agriculture and Fisheries, before stepping down to focus on research. In semi-retirement, he was employed in a part-time capacity at the National Institute of Water and Atmospheric Research. Bob gained an MSc from Victoria University of Wellington and a PhD from Harvard University, and was a Fellow of the Royal Society of New Zealand. He died suddenly in February 2011.