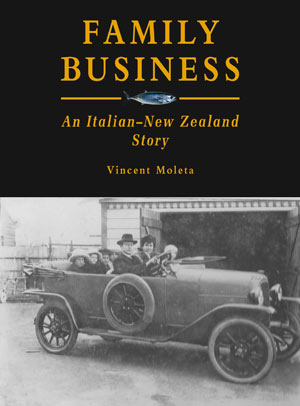 Bartolo Barnao first sailed into Wellington in 1902, aged 13, and began work in the fish trade. Eight years later he revisited Stromboli to marry the bride who had been chosen for him by the parish priest in his village. Bartolo and Giuseppina returned to New Zealand and raised their five children in Palmerston North and Wellington.

In this fascinating book, Italian literary scholar Vincent Moleta traces the story of his grandparents' childhood on Stromboli at the end of the 19th century; of Bartolo's year as a cabin boy on a steam trawler sailing out of Napier; of his two years driving a cart of freshly caught fish through the night from Makara Beach to the fish market in Wellington; of the death in 1911 of the couple's first child, of the family company set up by Bartolo and his brother Giuseppe, which came to dominate the fish trade in the central North Island.

We learn of the serious family rupture in 1930 that saw Bartolo sell up and move to Wellington, settling in Island Bay and establishing, in the teeth of the Great Depression, Barnao's Fish Market in Lambton Quay, which became a Wellington institution.

Vincent Moleta paints a lively picture of life in Island Bay, New Zealand's 'Little Italy', from 1900 to the 1960s: of the Catholic tennis club socials and the Fascist club meetings of the 1930s; of Italian weddings; of the New Zealand tour of the Italian grand opera company in 1949. He weaves these events and themes into a moving account of the family's moments of joy and sorrow, taking their story up to 2004 and the death of his mother, Rosina Barnao Moleta.

The book sheds light on a little-understood strand in New Zealand's post-colonial history, and the rich culture the AEolian migrants brought with them.

'It's a family story, and worth it for anyone who's interested in the familiar Wellington names, the interesting snippets of local history and to know how there came to be hard working Italians in D'Urville Island, Palmerston North, and Island Bay.' Capital Times

Distinguished mediaeval scholar Vincent Moleta lives at Fontecolombo, a magnificent Italianate homestead he had built 300km south of Perth. He retired there in 2000 after 27 years teaching in the Department of Italian at the University of Western Australia. From there he maintains his AEolian Press and has founded an annual festival of chamber music (www.chambermusic.com.au). His earlier books includeGuinizzelli in Dante, Roma, Edizioni di Storia e Letteratura, 1981; From St Francis to Giotto, Chicago, Franciscan Herald Press, 1983;Gloriosa donna de la mente, Firenze, Olschki, 1994; Umberto Saba: Poetry and Prose, Bridgetown, AEolian Press, 2004. He directs - for the academic publisher L.S. Olschki, Florence, - the series 'Italian Medieval and Renaissance Studies'.