Arthur Prior - A 'Young Progressive': Letters to Ursula Bethell and to Hugh Teague 1936-1941 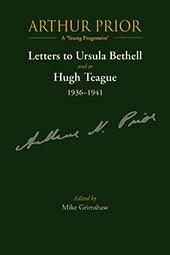 Arthur Prior (1914–69), the founder of ‘tense logic’, is regarded as New Zealand’s greatest 20th-century philosopher. It is commonly believed that the philosopher J.N.D. Findlay lured a young Prior away from theology and his training for the ministry to the world of philosophy. However, as Prior’s letters to the poet Ursula Bethell and to his communist cousin Hugh Teague now make clear, he did not simply abandon theological study in order to immerse himself in philosophy – nor does it seem that it was a matter of his disbelieving in theology one minute and believing in philosophy the next. Until World War II, and, it appears, for a time afterwards, Prior seriously considered a career as a religious journalist, especially when travelling and living on the Continent and in England with his first wife, Clare Hunter. During these years, Prior wrote widely on theology and contemporary Christianity.

In his correspondence with Ursula Bethell – who called him one of her ‘young progressives’ – and Hugh Teague, Prior discusses in detail his religious and theological thought and his personal beliefs and influences, including his shift from formal theological study into a world of journalism and philosophy. These previously unknown letters, which cover the years from 1936 to 1941 and his time in Dunedin, Wellington, France and London, chronicle a substantial part of a fascinating period in Prior’s development, both theologically and philosophically.

Prior’s letters have been transcribed and annotated for this volume by early Prior scholar Mike Grimshaw. An essay by Mike Grimshaw and an introduction by Prior expert Jack Copeland provide further context, including a brief introduction to tense logic.

Mike Grimshaw (PhD Otago) is associate professor in sociology at the University of Canterbury, New Zealand. Trained as a theologian and historian, he has taught religious studies at Victoria University of Wellington and the University of Canterbury. His areas of expertise include New Zealand cultural, intellectual and religious history, as well as religious and social theory. A leading scholar of the early life and thought of Prior, having published on unknown Prior notebooks and on Prior’s work on James Joyce, he is currently working on Prior as public intellectual and on the wider intellectual, theological and cultural circles that Prior inhabited.