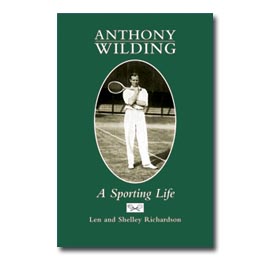 Anthony Wilding won the Wimbledon men’s lawn tennis title in 1910 and remains the only New Zealander to have done so.

In the years that remained before the Great War, he dominated the international tennis world by defending his Wimbledon title at three successive championships.

In 1913 he won world titles on clay, grass and wood, and was thought invincible. The handsome, athletic New Zealander, given to motorcycling around Europe, became the matinee idol of a sport keen to widen its popular appeal.

It was as a representative of New Zealand tennis that he first achieved international prominence. Partnered by Melburnian Norman Brookes, Wilding put Australasia’s name on the Davis Cup in 1907 and defended it in Melbourne (1908), and Sydney (1909). In the final act of his sporting career he joined Brookes to reclaim the trophy for Australasia as war was declared in Europe.

Wilding’s death on the Western Front, in May 1915, meant that New Zealand never saw its champion on court at the peak of his powers.

Len and Shelley Richardson's study of his life fleshes out an important strand in New Zealand’s search for an identity. In this sense Anthony Wilding sits alongside the 1905 All Blacks and Olympic champion Jack Lovelock as one of the most important sporting icons of New Zealand’s twentieth-century history.

'The tennis in this book is interesting. But it's the rest – the portrait of Wilding the person, and the glimpse of an era long since vanished – that makes it such compelling reading.'
Joseph Romanos, New Zealand Listener

Len Richardson lectured for several decades at the University of Canterbury, where he taught New Zealand and Australian history and courses exploring the relationships between sport and society. His publications include several books and numerous articles on labour history. His more recent writing has focused on the social significance of sport.

Shelley Richardson is a graduate of the University of Canterbury in history, with a special interest in women’s history and that of the family. Her MA thesis, completed in 1997, explored these themes, focusing on the life of Julia Wilding, Anthony’s mother. She has tutored in New Zealand history and is currently engaged in writing and editing projects while preparing her MA research for publication.