Along Blueskin Road: A collection of poems 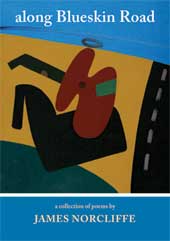 along Blueskin Road is a rich and diverse collection of poems from one of New Zealand’s leading poets. Whether tender, lyrical, quirky or comic, the poems are invariably richly imaginative and beautifully crafted.

Many of the poems were written in Dunedin during James Norcliffe’s tenure as Burns Fellow and are imbued with a sense of this most poetic and individual of New Zealand cities; other poems derive from places as diverse as Borneo and the antebellum American South.

Alan Riach wrote of A Kind of Kingdom: ‘An atmosphere of summer lightning plays around James Norcliffe’s poems . . . they act as tilted mirrors, sharp-edged postcards . . .’

And of Rat Tickling, Claire Hero has written: ‘[the poems are] always exploring the raw edges of the sensuous, the beauty that shares its bed with danger...Norcliffe has given us a book as beautiful as a polished knife...’

Poems in along Blueskin Road have been published worldwide in such journals as Sport and Landfall (New Zealand), Island and Southerly(Australia), Antigonish and Malahat Reviews (Canada), Gargoyle and Sycamore and Manhattan Reviews (United States).

James Norcliffe was born in Greymouth in 1946. Apart from extended periods in Asia, he has lived in Christchurch most of his working life. He has published widely in New Zealand and overseas and, in addition to a number of novels for young people and a collection of short stories, his previous work includes four collections of poetry: The Sportsman & other poems (Hard Echo Press, 1988), Letters to Dr Dee(Hazard Press, 1994), short-listed for the New Zealand Book Awards, A Kind of Kingdom (Victoria University Press, 1998) and Rat Tickling(Sudden Valley Press, 2003).