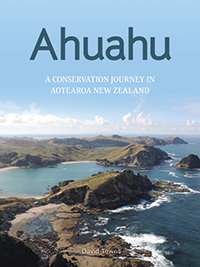 This book uses the Mercury Islands as central characters in an engaging account of progress in understanding New Zealand biodiversity, and improving ways to protect it. These islands are particularly instructive, as they range from the large, inhabited Ahuahu (Great Mercury Island) down to several small uninhabited islands. The book shows how Polynesian and European colonists altered the landscape of New Zealand, and brought passengers (intentionally or not) including three species of rats. Gradually, it was recognised that rats could fundamentally change the ecology of islands, both directly (e.g. by predation on invertebrates and reptiles) and indirectly (e.g. by eliminating nesting seabirds, which previously dropped huge quantities of marine fertiliser in their guano). This motivated the remarkable, almost heroic, development of methods for eradicating invasive mammals from islands – at first small tentative attempts, then large bold programmes.

All this is told first hand by David Towns, who first visited the islands in 1971. At that time, only the two smallest islands in the group had no pests. In 2014 the last mammals were eradicated from Ahuahu, making the entire group pest-free. The book documents the remarkable subsequent recovery on these islands, and gives many other relevant examples from elsewhere in New Zealand. It also details the importance of social attitudes, with sections on the benefits of bicultural approaches to conservation, greater community involvement in conservation action, and dealing with opposition to conservation use of toxins. The book finishes with an optimistic view of the future potential benefits from our new-found ecological proficiency. For anyone involved in conservation projects, this book provides a scientific basis for, and social history of, their efforts.

David Towns did his MSc and PhD at the University of Auckland. After six years overseas at universities in the USA and Australia, he returned to New Zealand in 1982 to work with the New Zealand Wildlife Service as a conservation scientist. In 1987 the Wildlife Service became part of the newly formed Department of Conservation (DOC). He stayed with DOC until 2012, when he began a shared appointment between DOC and Auckland University of Technology (AUT), teaching conservation there as a Professor of Applied Conservation. David won the Charles Fleming Award for Environmental Achievement from the Royal Society Te Apārangi for his pioneering research in conservation and island ecosystem ecology in 2019. David retired from AUT as Professor Emeritus in 2020, which gave him time to distil the key messages from a lifetime’s conservation experience into this book.