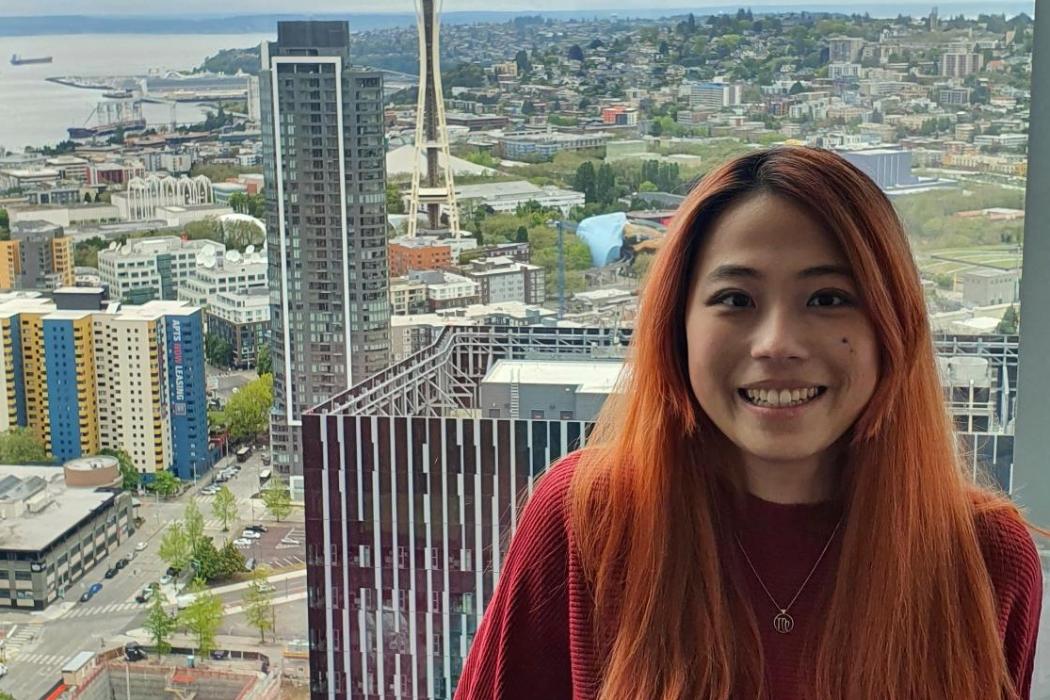 Can you tell us about your current role with Amazon? What do you think is your favourite thing about this current role?

I am a front-end software development engineer at Amazon. I joined Amazon Web Services (AWS) CloudWatch in Dublin in 2020 and had the opportunity to internally transfer to Seattle in 2021. I have built software used by many AWS customers, and now I get to do that on an even bigger scale for Alexa and Amazon.com.

My favourite thing about my job is the technical complexities and that I am trusted to lead and deliver them. Projects are often quite ambitious and ambiguous - you have to let your creativity flow, figure out how to solve the problem, and then build it - by yourself, or perhaps in a team of 20. I have access to very talented 'Amazonians' all round the world and almost everday I meet someone new and learn something new!

Since graduating, you’ve had opportunities to work across the world! How have you navigated change and knowing when it’s time to move on to a new challenge?

I did my BE(Hons) in Electrical and Electronics Engineering as it opened up a lot of career paths when I didn't know exactly what I wanted to do. Straight after graduating, I started at IBM which saw me explore different areas of tech. I learnt a few programming languages on the job and after working on a full-stack software dev project for their major Australian client, I found my interest for software engineering. After working for NZQA and BNZ, my boyfriend was offered a job in Lisbon! I had always wanted to work in Europe so his offer motivated me to start looking for work.

With perseverance and patience, 40+ interviews and 2 weeks later, I joined OLX - one of the biggest eCommerce platforms in Europe. Here I was able to lead their multi-website rebrand which really spark my interest in front-end software development. I later moved to Dublin to join AWS CloudWatch, and then more recently moved to Seattle to work on the Alexa product. Being able to move from city to city within the same company was a huge bonus for me.

For others looking to work overseas like you have done, what job hunting or career advice would you offer?

Being in tech and software development, the skillset is easily transferable and you can work almost anywhere. Do not give up after 1 or even 10+ rejection emails - learn from these interviews, brush up on your knowledge, stay sharp and keep trying.

The three main things I considered when looking to work overseas were 1. language, 2. the living cost and 3. visa requirements. With that being said, if you have for just one second considered living and working overseas, just do it!

What would you consider your career highlights to be so far? What are you most proud of?

Being involved in the design, implementation and launch of numerous Amazon features used by millions of customers globally - and then receiving positive feedback on social media and tech blogs is pretty cool! I am proud of the technical and soft skills I have acquired to be able to confidently lead a diverse group of engineers and deliver high-profile and large-scale projects.

You were involved in many clubs at UC across many interests - you must have had a pretty full schedule! What do you remember most fondly about those days?

I do like to keep myself busy and I certainly had a lot of fun during my study! A physics lecturer evaporated a giant piece of copper in front of us, we successfully tamed a robot and made it navigate through a maze at 3am in a lab and going on a jazz band camp with my friend's mum who later became an Eng lecturer of mine - just to name a few memories!

I didn't stay in the halls but thanks to the Emerging Leaders Scholarship I met lots of people and we would go to all kinds of UCSA events together.

My involvement in tech started when I became the Google Student Ambassador which saw me run cool events on campus. In my final year I was also elected the first ever female chair of IEEE student branch (Institute of Electronics and Electrical Engineers).

I remember running back and forth from the Kirkwood Village to get to lectures - personally I think that is almost as hard as the infamous central library stair climbing challenge!