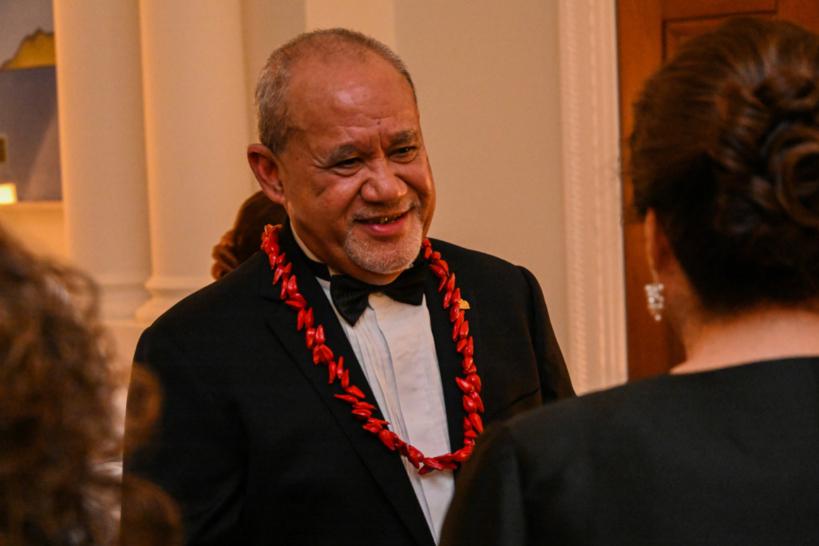 Leasi Papali’i has used his education from the University of Canterbury to propel himself into a long and impressive career in Government.

Can you tell us a bit about the journey which took you from your small village in Samoa to studying at the University of Canterbury?
My father passed away when I was 13 years old. As the oldest boy of nine children, I felt a strong responsibility to provide for my family. I wanted to be able to buy a piece of land in town and build a nice house for my mother and siblings and knew that getting a good education would be important in achieving that.  I applied for and was awarded a scholarship which sent me to New Zealand. I completed my final year of schooling at Waitaki Boys High School in Oamaru before heading to the University of Canterbury in 1974.

As part of the scholarship, you were required to study engineering, but it wasn't a subject you were passionate about, was it?
Yes, the scholarships were very specific and required the awardee to study Engineering or Medicine. There were 3 of us who went to UC to become engineers, but it wasn't something I was particularly interested in before. I was focused on succeeding. However, the university lifestyle provided the freedom and distractions that the controlled environments of village and family life in Samoa and boarding school did not. The three of us all failed our first year and were sent back to Samoa where we were reprimanded by the Prime Minister for not making the most of the opportunity. I asked for a second chance – one where I could study something that I really wanted to do. I had taken an Economics paper during my Engineering studies and really enjoyed it. I was allowed to return to UC, where I completed my degree in Mathematical Economics, or Operations Research as it was called back in the 1970's. Our economy was slowly developing following Independence in 1962, so I felt that Samoa needed Economists just as much as we needed engineers and doctors. I enjoyed economic theory but I liked solving economic problems using maths.

Where did your studies take you? What led you to your role as the Samoa High Commissioner?
Once I graduated, I was required to return to Samoa and work for the Samoan Government for the same number of years that I had studied abroad. Beginning in January 1978, I began working as a Research Officer with the Samoa Treasury Department. In 1981, while still bonded to the government, I applied for a Project Officer role with the South Pacific Bureau for Economic Cooperation (Pacific Islands Forum) in Fiji. I was released from my contract and moved to Fiji where I worked for the next four years. After returning to Samoa, I did a brief eight-month stint back with the Samoa Treasury Department, then in 1985 I started work with the Central Bank of Samoa as Assistant Manager of the International Department. Moving into the Manager position only a year later, I was then further promoted to Deputy Governor in 1987.

A highlight of my career was becoming the first ever Samoan Governor of the Central Bank of Samoa in April 1989, a position I held for 22 years. My career then took a shift when the Prime Minister asked me if I wanted to be a Diplomat. I moved to New Zealand where I took up my role as the Samoa High Commissioner to New Zealand in March 2012. From 2017 onwards, I also held the position of Dean of the New Zealand Diplomatic Corps, the fifth highest official in New Zealand in Order of Precedence; the Governor General, Prime Minister, Chief Justice the Speaker of Parliament and then the Dean of the Diplomatic Corps. After ten and a half years as High Commissioner, my term ended on 30 September 2022, and I have now retired after 44 years of working for the Government and am looking forward to moving back home to Samoa and enjoying time with my family.

Looking back on your time at the University of Canterbury, what memories and experiences have stayed with you?
The relationships built with those of us that came to UC on scholarship together, as well as those with other Samoan students studying at the University during that time, are the ones I still keep to this day. Canterbury has a strong Samoan community and there was a sense of family connection in a way that felt similar to family and village life back home. My friends gave good advice, and not so good advice, but it all helps in the development of who you are.  We all played rugby together and would go to church on Sunday. There was a group of Samoan girls who lived close to the University, and we always went to their flat knowing we could find nice food when there was not enough to eat at the Halls of Residence. It was a lovely time! There was a strong family spirit and the Lecturers were very helpful.

Did you have any hobbies or extra-curriculars while at the University of Canterbury?
While studying I was still supporting my family back home. I would send a large part of my allowance to them, and during the Christmas break I worked at the Post Office in Wellington. There was lots of overtime sorting Christmas mail, and the money was good. Four of us Samoan boys also formed a band. We were called ‘The Bled’ and wore red shirts and black pants. I was the base guitar player. The other members of our band included a Senior Judge of the Samoa Supreme Court (Justice Nelson) and our current Ambassador to the United Nations (Dr. Luteru). We played at Samoan community functions in Christchurch, weddings and the likes, and sometimes had performances at the Aranui Bar. It was a good way to earn a little extra cash and have some fun while doing it. Oh, and of course going to The Bush Inn!

What advice would you offer to new students looking to come and study here at the University of Canterbury?
Focus. Focus on what you want to do, work hard and make good use of this rare opportunity. I wanted to do something, not only for myself but also for my family back home. Coming from humble beginnings where I sold newspapers after school and flower garlands (Ula’s) at the night clubs to earn money to support my mother and siblings, I wanted to be somebody and do something useful with my life. It is important to remember your roots and where you come from. A lot of parents worked hard, often working two or three jobs to put food on the table. You need to work hard and make your parents proud by making a good name for yourself and your family. There is a lot of competition making it harder out there now, but if you focus and manage your time and priorities properly you will do well.