Deposition of antimony and bismuth onto HOPG

Highly oriented pyrolytic graphite provides an extremely smooth surface on which the fundamental processes involved in diffusion and aggregation of atoms and clusters can be studied. Over the last ten years we have performed extensive studies of the diffusion of both Sb4 tetramers and Bi2 dimers on HOPG, and explored the formation of a wide variety of nanostructures using these simple deposition techniques. We are using a scanning tunnelling microscope to investigate the properties of these islands in more detail. 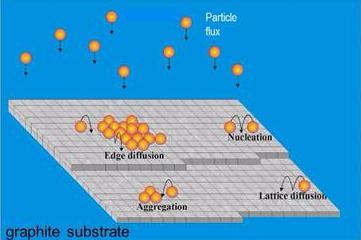 Schematic of the basic diffusion and aggregation process. 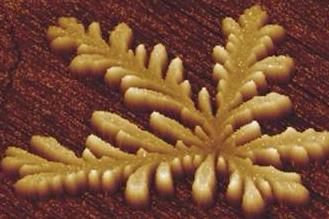 AFM image of a 'nanoflower' grown by deposition of Sb on HOPG. We have patented potential applications of these fractal metallic nanostructure as electrical contacts to neuronal structures such as those in the retina, Retinal prostheses are being developed by many groups in order to address issues like macular degeneration which is becoming more and more common. 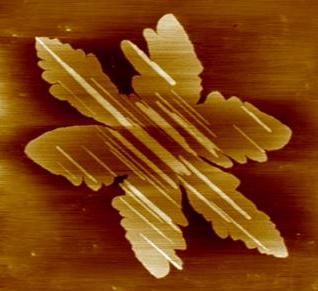 AFM image of a bismuth nanoisland grown on a large, flat HOPG terrace. Recently we have shown that the widths of the stripes are controlled by novel quantum size effects.