In general, there a two distinct approaches to fabricating nanoscale devices: ‘top-down’ and ‘bottom up’. In the ‘top-down’ approach, devices are created by a combination of lithography and etching. These are highly developed and reliable technologies, but the current state-of-the-art can achieve devices with dimensions ~10nm only at great expense. The ‘bottom-up’ approach proposes the assembly of devices from nanoscale building blocks, thus immediately achieving nanoscale resolution, but suffers from a range of other problems, including the difficulty, expense, and long time periods that can be required to assemble the building blocks.

A key question is whether or not the top-down and bottom-up approaches can be combined to fabricate devices which take the best features of both approaches while circumventing their inherent problems. We have recently been able to do exactly that: we have incorporated nanoscale clusters into electronic devices with nanoscale overall dimensions. 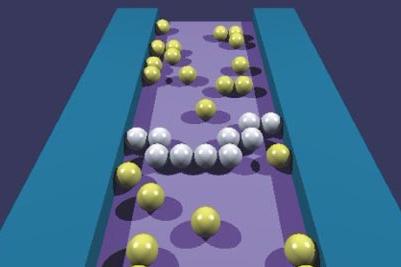 A schematic illustration of a cluster-based nanowire.

One of the merits of our technique is that it is extremely simple: nanoscale particles, formed by inert gas aggregation, are deposited from a molecular beam onto prefabricated lithographically defined nanocontacts. The cluster deposition is random but can be understood within percolation theory. By developing a deep understanding of the theory, and using sophisticated computer simulations, we have designed device geometries that ensure a single wire-like path is formed between the contacts near the percolation threshold. An electrically conducting nanowire, which is automatically connected to electrical contacts, is therefore formed with no need to manipulate particles individually, or to use complex fabrication techniques. The width of the wire can be controlled by the size of the deposited particles.
Schematic of our experimental arrangement for cluster deposition between a pair of electrical contacts. 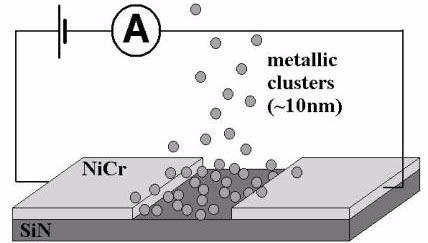 The work described above was originally intended as a first attempt to fabricate cluster deposited films with nanoscale dimensions, and to develop the technologies required for fabrication of a series of more complex devices. Work on these devices is now underway, as is an effort to comprehensively characterise the properties of percolating cluster films.

We have recently been able to produce our first devices using a new templating technology to allow assembly of clusters into working devices. Further details will be available after publication of this work. 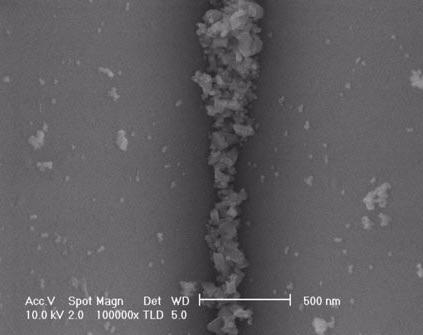 A Field Emission SEM  image of a Templated Cluster Assembled Nanowire, approximately 100nm in width at its smallest point.