In the macroscopic world, the physical properties of a material are independent of a sample's size. However, when sample dimensions are made sufficiently small, the properties of a cluster of atoms must ultimately depart from those in the bulk, and evolve as a function of size. As discussed in a recent issue of Scientific American[1], this transition region, where the 'homogeneous' bulk picture gives way to an increasingly 'atomistic' description, is an area of intense current research interest [2,3]. The determination of the structure of nanometre-size clusters of atoms is a central problem underpinning all activity in this field.

In bulk crystals, structure is characterised by the periodicity of a lattice, whereas in a cluster of a few hundred atoms, translational symmetry is not required. In such clusters, the high proportion of atoms at the surface make a crucial contribution to the particle's total energy. Energetically favourable patterns of atoms on a cluster's surface can force a re-arrangement in the interior. Hence clusters can, and do, adopt new atomic arrangements, which may be forbidden in the bulk [4], e.g. in most materials that are face-centred-cubic (fcc) in the bulk, small clusters form with axes of five-fold symmetry (icosahedral and decahedral structures) and irregular atomic spacing. 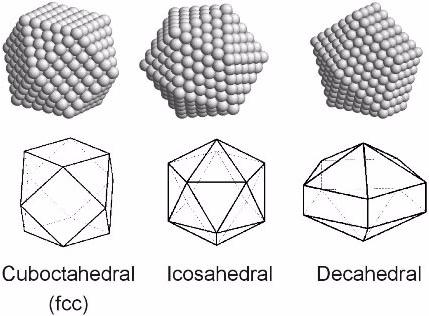 This image shows the three typical structures that are observed for small particles of materials whose bulk structure is fac-centred-cubic.

A large number of fundamental questions need to be answered: How do these structures nucleate and grow? How do clusters transform from one structure to another as successive atoms are added during growth? At what size does the bulk structure prevail? Given that atomic structure plays a critical role in determining all cluster properties, it is remarkable that these questions remain unanswered – the inherent difficulties in both the theoretical and experimental determination of cluster structure have been major obstacles. As a result, much structural information has been obtained indirectly, from experimental observations of other cluster properties, which has led to incomplete and sometimes ambiguous interpretation. 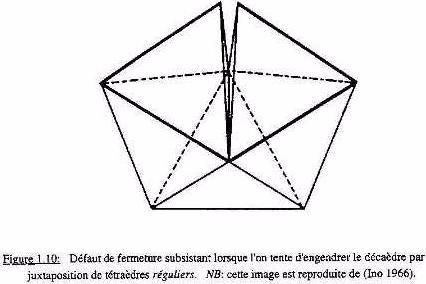 5 tetrahedra can almost, BUT NOT QUITE, form a particle with 5 fold symmetry (an icosahedron). Icosahedral atomic clusters are therefore strained. Click on the image for more detail. From the Ph.D. thesis of Reinhard, reproduced from Ino.

Electron diffraction from a beam of clusters is a powerful method for the direct study of cluster structure. In such experiments, observations are made on unsupported clusters under vacuum, free of interaction with a substrate, or from surface contamination, which might otherwise alter the delicate balance of energies determining structure. The technique was demonstrated beautifully in a series of classic studies of rare gas clusters by a group at Orsay. [5] A similar apparatus has been developed by Blair Hall (now at IRL in Wellington, and a collaborator on this project) specifically for the study of metal clusters, and will soon arrive at the University of Canterbury. This equipment has a proven track record of success. [6,7,8]

Previous structural studies of metal clusters have concentrated primarily on elements whose bulk atomic arrangement is fcc. The primary objective of our current work is to investigate the structures of clusters of a range of non-fcc materials. 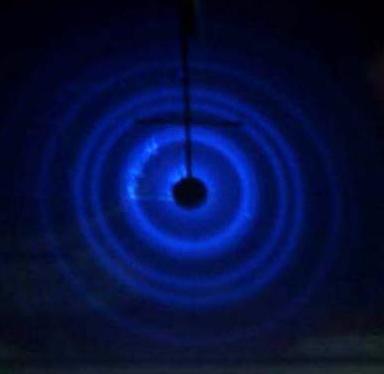 This is the first electron diffraction pattern obtained in the atomic cluster research laboratory. The sample is a thin film of polycrystalline gold and each diffraction ring is due to scattering from a specific plane of atoms (e.g. [100] or [111]).

This diffraction pattern was observed on a phosphor screen. Diffraction patterns for clusters are much weaker and must be detected with a sensitive electronic detector (a CCD chip, or in our new apparatus, a Reticon Linear Diode Array). 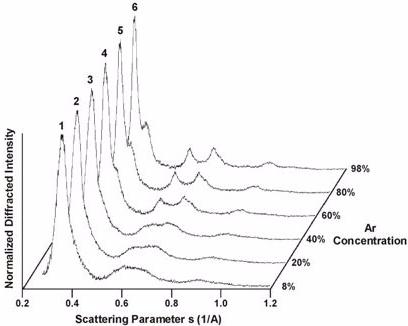 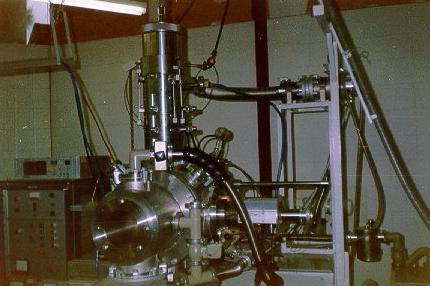 A photograph of the inert gas aggregation source used to generate atomic clusters. Although the image is not very clear, the cluster source chamber can be seen at bottom left and the column of a converted scanning electron microscope is on top of the main vacuum chamber. The converted SEM is used to produce a stream of electrons which are scattered from the clusters - the scattered intensity allows us to determine the structure of the clusters. The turbo pumps at right are used to achieve the low pressures needed in the vacuum chamber. 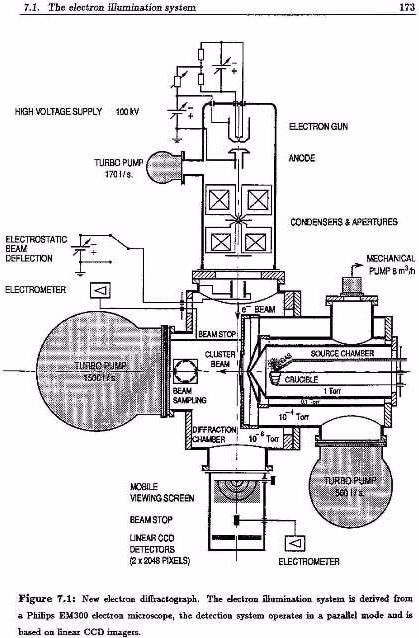 Detailed diagram of the inert gas aggregation source used to generate atomic clusters, together with the high vacuum and electron diffraction apparatus. Click on the image for more detail.

[From the Ph.D. thesis of Blair Hall, who constructed the above apparatus at EPFL in Lausanne, Switzerland, and who is an important contributor to this project. Blair is now at Industrial Research Limited, Lower Hutt, NZ.] 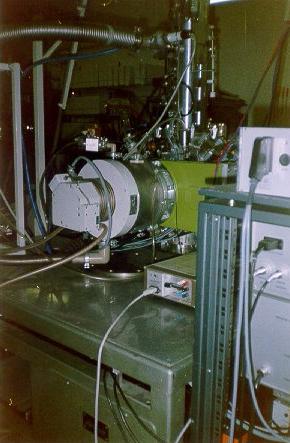 Rear view of the cluster production and electron scattering apparatus. Again the column of the converted scanning electron microscope can be seen on top of the main vacuum chamber.