Otolith Microchemistry of Whitebait on the West Coast 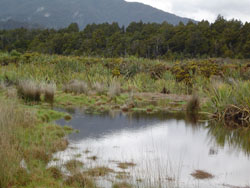 We are exploiting the unique life history of New Zealand native diadromous fishes to test retention-dispersal hypotheses in the coastal zone.

New Zealand has at least 19 species of galaxiid fish, most of which spend their whole life in freshwater, but several of which have their juvenile and adult phases in streams and their planktonic phase in the open ocean. The commonest 'whitebait' species is Galaxias maculatus, which lays its eggs during autumnal 'spring' tides amongst riparian grasses on tidally flooded banks of rivers followed by hatching at the next 'spring' tide when larvae are flushed into the sea with the outgoing tide. Six months later, developed juveniles return through coastal waters to settle in freshwater habitats. By using elemental fingerprinting we will determine the degree of relatedness of populations along the West Coast of the South Island.

Specifically, we will test the hypothesis of endogenous recruitment to natal streams. We will identify the elemental fingerprints of larvae originating from rivers on the West Coast using otolith microchemistry techniques to directly measure the dispersal of individual larvae. Laser ablation inductively-coupled plasma mass spectrometry can detect trace element inclusions in fish otoliths (ear bones). The concentration of selected elements within the otolith (the elemental fingerprint) can be used to discriminate among groups of fish that have spent at least part of their lives in different environments. Diadromous galaxiids are ideal models for these techniques because the individual rivers in which they originate have distinctive chemical composition, due to historical land use practices such as mining and agriculture, which is encoded within the elemental fingerprints of otoliths. These are extractable from all life stages from eggs to adults, which can be readily captured and analysed. By categorising streams and populations these fingerprints allow a determination of the natal source of returning juveniles. This will allow us to answer questions like - What is the source of whitebait entering any particular river? Are the whitebait entering a river a product of that river or that region? Further analysis of otolith microchemistry will also determine if galaxiid larva develop nearshore or in the open ocean.

Why study dispersal of Galaxids? 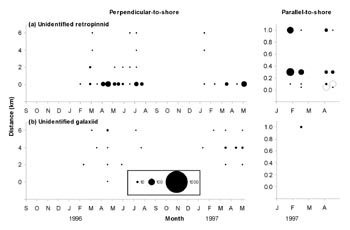 During Ph.D. research by Michael Hickford, he completed many plankton tows around the Kaikoura Peninsula. His sampling design looked at the composition of larval fish assemblages at different distances from shore and at different distances alongshore from rocky reefs. The offshore surveys revealed some noticeable differences between two similar taxa:
The anadromous retropinnids (see photo below) occurred almost exclusively at the nearshore stations (see Figure).
This taxon's ability to maintain this distribution is most likely a result of its life history.

What do the Latin names mean? Galaxias - refers to the colour pattern on the adult fishes and compares it to the profusion of stars in a galaxy maculatus - from the Latin word for spotted or blotched

Adult retropinnids spawn in rivers, releasing eggs that then sink to the substrate. The eggs develop there and, after hatching, the larvae are carried out to sea by river currents. Larvae are about 5 mm in length when they hatch, so it is likely that by the time they reach the sea they are capable swimmers. It has been suggested that fish larvae that are larger at hatching and at a more advanced stage of development because of hatching from demersal eggs may be more capable of remaining within a given area by using their superior swimming and sensory abilities. For retropinnids, a lack of planktonic dispersal while in the egg phase coupled with a stronger swimming ability may allow them to restrict their distribution to nearshore areas.

The offshore distribution of the retropinnids contrasts markedly with that of the galaxiids (photo below, left). Like the retropinnids, galaxiid larvae hatch from demersal eggs in freshwater before entering the sea. Galaxiid larvae are also relatively large (7 - 9 mm) when they enter the marine environment, and they too should be capable of maintaining a nearshore distribution. However, in this study, galaxiid larvae appeared to disperse widely, with few larvae occurring close to shore (see Fig. 4 above). 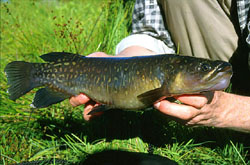 The differing spatial distributions of these two families may reflect contrasting needs in terms of using the planktonic phase as a dispersal mechanism. The galaxiids, like the retropinnids, are diadromous. However, they are mostly amphidromous. The larvae of amphidromous species migrate to sea soon after hatching to feed and grow to a post-larval stage. Juveniles then migrate back into freshwater where most somatic growth, as well as sexual maturation and reproduction, occurs.

For anadromous species like the retropinnids, most feeding and growth is at sea prior to the migration of fully-grown adult fish into freshwater to reproduce. Retropinnids are short-lived (1-2 years) and can disperse widely both as juveniles and adults during their extended period at sea. Most of the amphidromous galaxiid species are much longer-lived (up to 27 years for Galaxias argenteus), and are likely to use their planktonic phase as a dispersal mechanism so that post-larval stages can restore populations in perturbed river systems. The positioning of galaxiid ichthyoplankton further from shore may aid in this dispersal.

Where do Galaxiids occur? The Galaxiids are the southern hemisphere's equivalent of salmon. They do not occur in the northern hemisphere. However, not all Galaxiid species that occur in New Zealand are endemic. Galaxias maculatus is also found in Chile, the Falkland Islands, South Australia, Tasmania and Lord Howe Island.