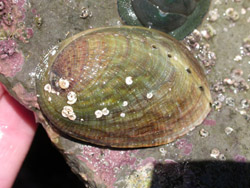 The inter- and intra-specific phylogeography of Cellana limpets and Haliotis abalone are being investigated using several genetic markers, including mtDNA, microsattelites and reproductive protein genes. Hypotheses of gene flow and physical dispersal barriers around New Zealand are being examined as well as the historical demographic influence of the species.

One of the hypotheses being tested looks at the influence of Cook Strait as a barrier to dispersal, as suggested by previous studies on other marine organisms. Our preliminary limpet data suggests that Cook Strait may be a more complex region of convergence and historical fragmentation than a comtempory dispersal barrier. Further analyses are being done to confirm this idea.

The use of intertidal and subtidal molluscs with similar larval history and species age will help to find concordance in phylogeographic pattern around New Zealand.

The various morphs of Cellana radians.