How does removing a habitat-forming species alter local diversity? 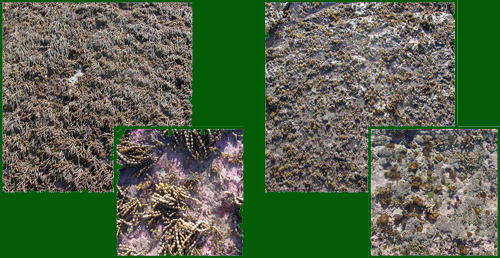 Habitat-modifying, dominant species such as algaes, seagrass, corals, and mussels are known as ''foundation species' or 'ecosystem engineers' because they provide habitat for a high diversity of species. This is achieved through increasing the heterogeneity of habitat, reducing the water flow, stabilising the substrate, increasing sedimentation, reducing light, and providing substrate for species to live on.

Community ecologists in general have focused attention primarily on the role of negative interactions in regulating populations and structuring communities. This research examined the role habitat-forming species play in positive interactions through their removal.

This experiment examined how the removal of Hormosira banksii affected the local diversity after a period of several months. This species is prone to disturbance and sensitive to trampling as shown in previous experiments (Schiel and Taylor 1999). These photos were taken 9 months after the initiation of the experiment. The photos on the left are of the control plot, and those on the right of the plot were H. banksii was continually removed.
After 9 months, there was a decrease in perennial algae and macro-grazer species and abundance, and an increase in ephemeral seasonal blooms and coralline dieback. Overall, this resulted in a less complex habitat for associated species and about 40% less species present in experimental plots.

What are the mechanisms associated with succession in mid-shore mussel beds?

An experiment currently in progress is examining the role that herbivores (limpets, snails, and chitons), small predators (whelks and crabs), and large predators (birds and fish) play in mussel bed succession. Most research has shown that predation plays an important role in structuring communities in the low shore, but little research has looked at the relative contribution of herbivory and predation to community structure mid-shore.

There are generally two forms of dominant habitat on New Zealand's rocky shores; filter feeding invertebrates and algal dominated habitats. It is not known however, what exactly influences the type which is most dominant in a specific area. On the Kaikoura Peninsula and in many places around Banks Peninsula on the East Coast of the South Island, the shore is dominated by algal beds. On much of the West Coast and in scattered areas on both of the Peninsulas mentioned before, habitats are predominantly composed of filter feeding invertebrates, such as mussels and barnacles. Studies into what determines the nature of the dominant habitat occupiers and how they interact with each other to determine which type is best at surviving there, is the aim of this investigation. Establishing indicative samples of the recruitment availability for these sites are important. This is being done with a well known sampling medium called a "tuffie". Tuffies have been placed in areas that are dominated by each of these two dominant habitat types on the Kaikoura Peninsula to establish mussels are actually recruiting to these sites. Seasonal variation in the numbers recruiting will also be examined. If there are suitable numbers for settlement, what determines whether one habitat type can out-compete the other for dominance of an area? Are physical factors involved or is there are relationship between predation or competition?