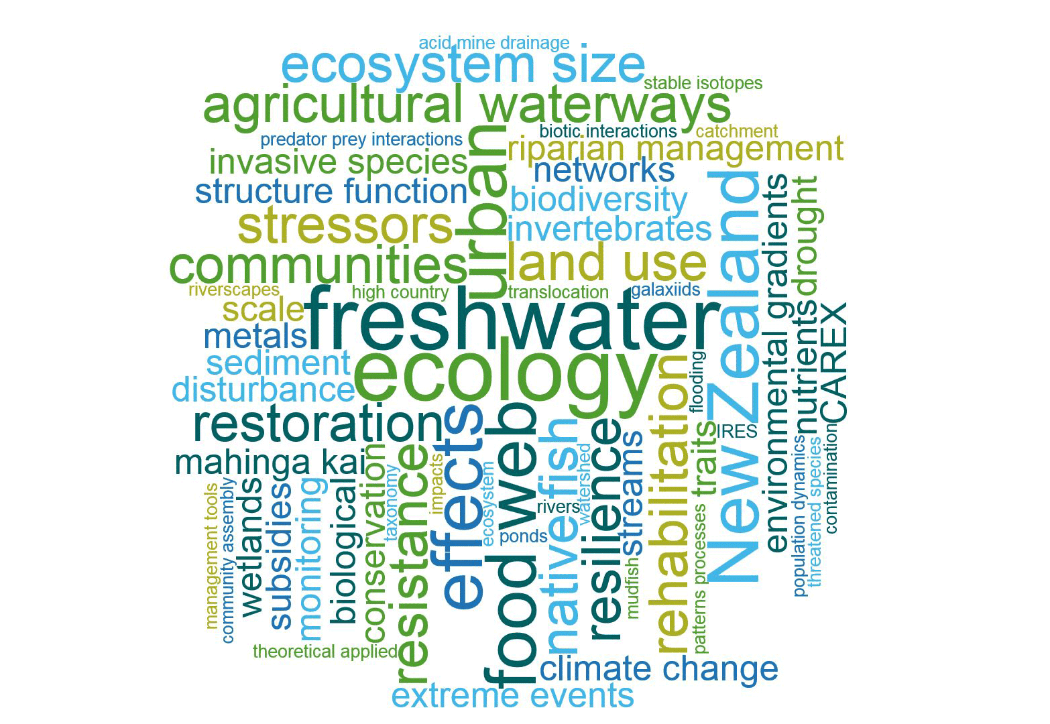 FERG research includes a wide range of freshwater-related questions using a variety of approaches. This covers the whole gambit of freshwater topics from landscape and ecosystem-scale studies to community and population ecology investigations, and includes restoration and conservation-focused work through to more fundamental ecology.

We focus especially on the waterways of Canterbury and the West Coast of New Zealand's South Island, but have been involved in research in many places around the world. We're mostly concerned with streams and rivers and the things that live in them, but are increasingly working on pond and wetland systems as well as riparian ecosystems.  We use a variety of empirical approaches ranging from landscape-scale measurements to reach-scale and mesocosm experiments, and expect to be including more modelling and forecasting approaches with the arrival of Jonathan Tonkin in the group.

You can find resources, including handouts, posters, newsletters and data, on our FERG Figshare account. For FERG peer-reviewed articles, books and theses see our outputs.

Below are the current projects and research interests of our four FERG leaders.

Currently I am working on lowland agricultural and urban stream systems. In agricultural streams this focus is on testing and developing practical restoration tools to reduce stressors and improve benthic community health. In urban streams, I am investigating the loss of habitat heterogeneity, invertebrate diversity and urban stream food webs.

I am interested in a wide range of fundamental and applied ecological questions, mostly in freshwater ecosystems, within three major themes:

1.The restoration of damaged ecosystems: developing solutions for multiple stressor problems associated with nutrients, sediment, weeds, invaders, and low flows; the social/organisation structures required for restoration; development of demonstration sites and practical trials; and knowledge needed to underpin restoration, including ecological tipping points and thresholds, resistance and resilience, and controls on ecosystem functioning and services.

2. Populations and communities at landscape scales: how large-scale characteristics of ecosystems influence trophic structure and functioning. Recent focus on influences of cross-ecosystem subsidies, ecosystem size and stream drying, and application of knowledge to the management of flows and water levels in freshwater systems.

3. Population and community persistence in the face of global change: conservation of threatened species, especially native galaxiid fishes in New Zealand, but including freshwater communities in a wide range of ecosystems including alpine tarns and lakes, braided rivers and urban streams.  Global change drivers investigated include: invaders, land-use change and intensification, and climate warming including effects on extreme events like droughts and floods.

I am a quantitative community ecologist. In general, I couple basic ecological theory with quantitative modelling to address major global issues in freshwater ecology and management under global change, including: metacommunity dynamics in dendritic networks, flow management under hydroclimatic nonstationarity, river restoration, ecological interaction networks in dynamic systems, the role of temporal environmental variability in shaping population and community dynamics, multi-scale ecological stability, and developing community-wide mechanistic models. My research programme is increasingly focused on developing a mechanistic understanding of ecological communities and networks in dynamic environments to improve the forecast of biodiversity under global change. I call on experimental field research, detailed natural history, and complex biological datasets to bolster this research.

Species roles in multilayer interaction networks
Studies of ecological networks (the web of interactions between species in a community) have led to great advances in our understanding of the structure and organisation of ecological communities. However, such studies often overlook the role of individual species in forming these complex networks and the extent to which species roles vary with the context in which they are found. I use modern tools, including network motif analysis, to understand the causes and consequences of species roles in complex multilayer networks.

Mechanistic models to improve the forecast of biodiversity under global change
Contemporary ecosystem management is guided by the principle of embracing the historical range of environmental variation when setting restoration targets for degraded systems. By pushing systems away from their historical envelope of variability, rapid climate change is increasingly putting this approach into question. I develop mechanistic models to understand whole-community (fish, invertebrates, riparian plants) responses to global change. I also explore the diverse outcomes of management interventions on river ecosystems, such as designer environmental flow regimes, which are increasingly being used to alleviate the negative influences of dam operations on riverine biodiversity.

Organisation of biodiversity in river networks
Rivers are spatially organised into hierarchical dendritic networks. This unique physical structure and the associated directionality of physical flows sets them apart from most other environments by regulating the dispersal of resident biota and therefore the distribution of biodiversity. River networks comprise collections of connected populations (metapopulations), communities (metacommunities), and ecoystems (metaecosystems). I study how biodiversity is organised in river networks and how their unique physical structuring affects metapopulation and metacommmunity dynamics.

My research is focused on understanding the structure and dynamics of freshwater communities with the aim of testing and developing ecological theory that is fundamental for the effective management of ecosystems. In particular, I work on understanding biological interactions in freshwater food webs with interests in: