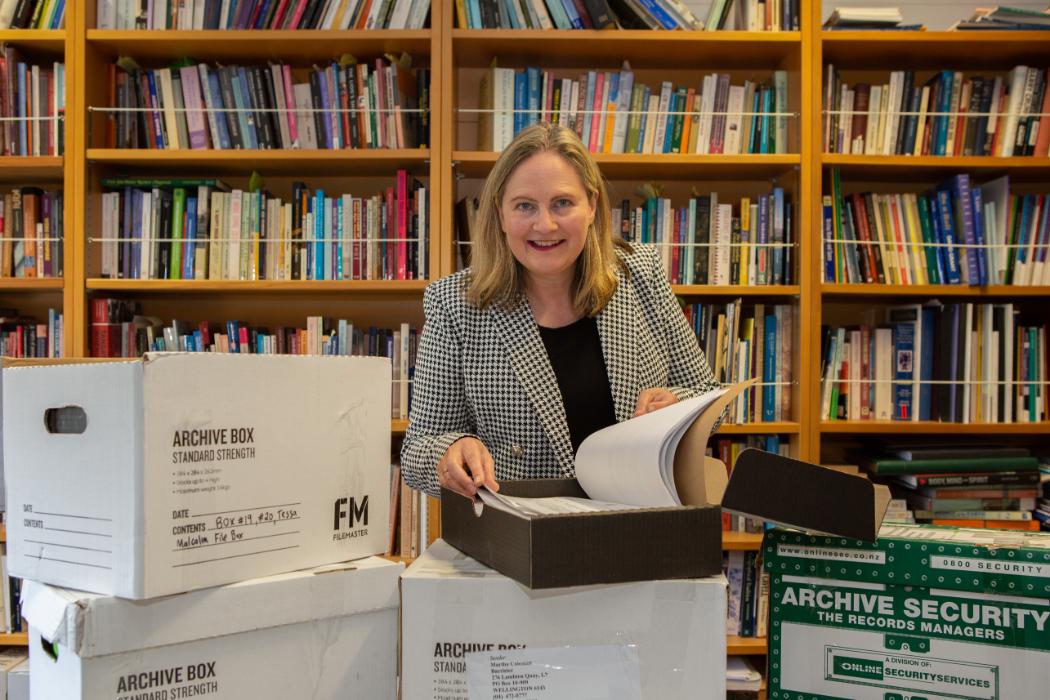 “It’s like I’ve been working towards this for my whole career,” Professor Pickles says of writing a new biography of Kate Sheppard.

Professor Pickles has received a bequest from UC alumna Tessa Malcolm, who died in 2013 and was a great, great niece of Kate Sheppard, to write the biography. The announcement of the bequest comes just ahead of International Women’s Day on Sunday 8 March.

Malcolm, a history lover and teacher who specialized in teaching dyslexic and gifted children, had planned to write a book about her famous great, great aunt and had started compiling material. Her will stated that she wanted her work to be completed and written as a biography, and her family members offered Professor Pickles this project.

“I think it’s really important that Tessa’s work is built upon and completed,” Professor Pickles says. “It’s very exciting and a great honour for me to be appointed to write this biography.”

The timing is right for a new biography, she says, with interest building in Sheppard as a person and an historic figure with the sell-out 2016 rock musical That Bloody Woman based on her life, and her house being bought by the New Zealand government last year for use as a public educational space.

“It has taken a long time for us, as a nation, to really appreciate her significance. She is a really important figure in Christchurch and New Zealand history and international feminist history.”

Pickles has just completed a Royal Society Te Apārangi James Cook Fellowship and will shortly publish a new book Heroines in History: A Thousand Faces. She has been studying Sheppard for over 25 years, since she began lecturing in women’s and feminist history at UC.

“I have knowledge of what makes a heroine in history and obviously Kate Sheppard is a national feminist heroine. This biography really is an evolution of my research and my teaching because it builds on so much that I’ve already done. It’s like I’ve been working towards this for my whole career.”

She has huge respect for Sheppard’s role in leading New Zealand to become the first country in the world to grant women the vote, in 1893.

“What was achieved here was phenomenal and it wouldn’t have happened without her. I think she was incredibly talented and very astute, she knew how to work with other people. She was pretty amazing, there’s no doubt about it.”

Professor Pickles believes it’s a huge benefit for a biographer to be based in Christchurch where Sheppard did most of her campaigning. She has visited her house in Ilam and says it has “a vibe” that reflects its past.

“I think it has a feeling of the women and men who gathered there, especially the front room where they assembled the petition [which gained more than 30,000 signatures] and pasted it together. That house was the ground zero of women’s suffrage in the whole world - that was the place where it began.”

A previous biography of Sheppard was published in 1992 by Judith Devaliant, but Professor Pickles says hers will be very different, focusing more on Sheppard personally and politically rather than the campaign for women’s suffrage.

She is looking forward to opening boxes full of material that Tessa Malcolm collected and begin working on the project. “I’ve got exclusive access to Tessa’s collection to finish what she started. As a biographer you really get to walk in your subject’s shoes and get inside their head. I'm keen to really get inside Kate Sheppard’s mind and get to know what she thought and how she ticked.”

The book will be finished by 2023 in time for the 130th women’s suffrage anniversary celebrations.

Malcolm was born at Hampton Court Palace, London on 18th July, 1944, as it was being used as a maternity ward during the war. Her parents were in England for her father Kingwell to study Engineering/Architecture. Soon after the war ended the family settled in Napier.  Malcolm grew up the third of six children and attended Nelson Park Primary, Napier Intermediate and Napier Girls’ High School.

Malcolm gained a degree in psychology at Otago University in 1968 and trained as a social worker and counselor and later as a primary school teacher at Christchurch College of Education. She specialized in teaching dyslexic and gifted children. She was a Quaker and advocate for feminism, peace and social justice.

More information at bequests at UC can be found here.