UC student stirs waters to clean them up

Disrupting stream communities may hold the secret to long-term restoration of waterways, according to a University of Canterbury student’s thesis. 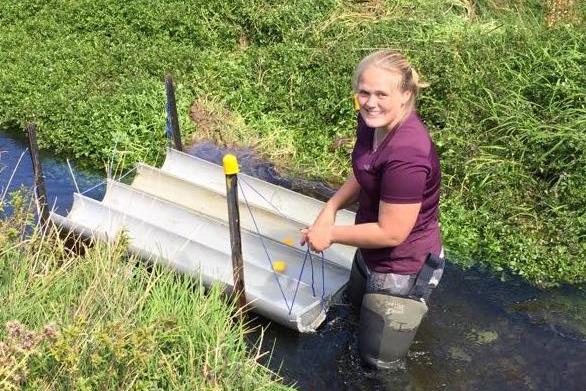 Disrupting stream communities may hold the secret to long-term restoration of waterways, according to a UC student’s thesis.

The theory that disrupting waterways highlights the weaknesses of unwanted invertebrates living in the ecosystem, is being tested by University of Canterbury (UC) doctoral student Issie Barrett as part of a BioHeritage Challenge project led by UC researchers. The project focuses on restoring degraded streams and rivers.

At UC’s Cass Field Station in Arthur’s Pass, Issie has built a bespoke outdoor system that artificially recreates freshwater stream ecosystems. She fills separate sections of the system with invertebrate and bug samples that have been taken from a range of streams – some healthy, some degraded and others that are prone to flooding.

Eighty per cent of the sample stream communities are then disrupted for 24 hours with elements including nutrients, sediment or a flood of water. This enables Issie to see changes that the disruption causes to the community of invertebrates living in each water sample.

“For example, we could disrupt – or stress – the stream with a flood which is likely to get rid of snails because they have the characteristic of not being able to swim,” Issie says.

“Knowing how to get rid of snails is a good thing because we don’t want them in a healthy waterway. Getting rid of them frees up space for more sensitive, desired species.”

She likens a healthy river – one that has a diversity of bugs that are food for larger organisms like fish – to a glass of rainbow juice.

“When a river is stressed, only the hardiest species like sedentary worms and snails can survive – taking up all available space. My theory is that we need to do something to destabilise the community, removing the biological advantage that worms and snails have.”

Her trial is part of a project that is using freshwater ecosystems as a model to test how degraded ecosystems can be resistant to disruptions – including those that aim to restore them. The project is being led by UC freshwater ecologists, Dr Helen Warburton and Dr Catherine Febria, of UC’s College of Science.

“An ecosystem’s ability to withstand and recover from a disruption are commonly associated with healthy communities. However, degraded ecosystems can also be resistant and resilient to disruptions, making them very hard to restore,” Dr Warburton says.

“In New Zealand, many ecosystems are degraded, having exceeded critical tipping points that leave them locked in a resistant state.”

The next stage of Issie’s trial is to extend the length of time that the disruption is carried out. The cause of the stress will then be removed, to see if the stream sample can be restored. In its third year, the trial will be carried out in a real stream.