University of Canterbury researchers have welcomed the Government move to protect the home of a giant native grasshopper on Crown land in the Mackenzie Basin, saying more work is needed to protect the nationally endangered species. 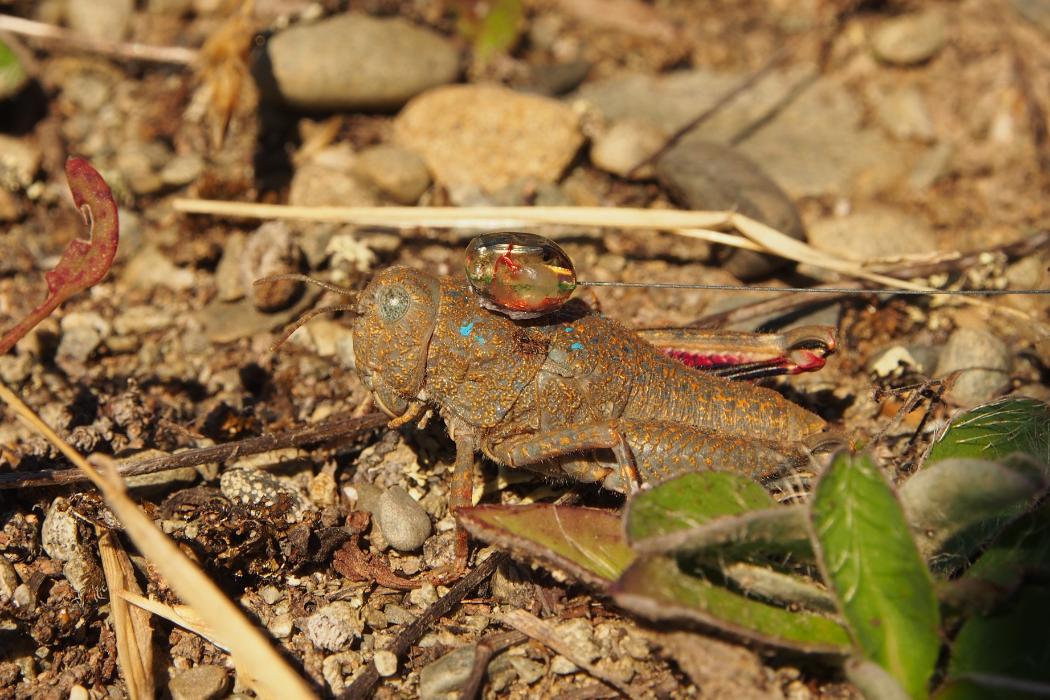 University of Canterbury researchers have welcomed the Government move to protect the home of a giant native grasshopper on Crown land in the Mackenzie Basin, saying more work is needed to protect the nationally endangered species.

Land Information and Conservation Minister Eugenie Sage announced today that the “Tekapo Triangle”, which is home to the largest known population of robust grasshopper (Brachaspis robustus), endemic to the Mackenzie Basin, was protected as conservation land.

“Protecting the Tekapo Triangle will provide a safe refuge and nursery that with the control of rabbits, feral cats, invasive weeds and other pests will help this distinctive grasshopper to thrive,” Eugenie Sage said.

University of Canterbury (UC) entomologist Dr Tara Murray, from the School of Forestry, says that as an endangered species, the robust grasshopper is in critical need of conservation action. One of her fields of expertise is conservation management of the robust grasshopper – including threats, monitoring methods and ecological requirements. Dr Murray has been conducting research in collaboration with Environment Canterbury | Kaunihere Taiao ki Waitaha and the Department of Conservation | Te Papa Atawhai (DOC).

“The robust grasshopper has the same threat classification as kea, two species of kiwi and the hoiho. It is more threatened than four other kiwi species, the hihi, whio and North Island kōkako,” Dr Murray says.

“There are 779 insects listed as ‘Threatened  ’ or ‘At Risk’ in New Zealand and hundreds more we don’t know enough about to classify. Focusing on them could allow us to save more species than ever before, while at the same time educating future generations on the value of insects both in natural ecosystems and for production land,” she says.

“This will have a significant impact on protecting New Zealand biodiversity.”

An opportunity to make a difference

Dr Murray’s research group is gaining national and international interest, turning her lab into the place to go for insect conversation research.

“My relatively new research lab is focused on developing a robust scientific framework for insect conservation and is currently centred on how to effectively monitor small, cryptic and very rare insects, so we can then understand the impacts of any conservation management applied.”

Dr Murray says only a few individuals are working on insect conservation management nationally. This presents an opportunity to develop a niche research group at UC and attract students who have a desire to make a real difference at the forefront of conservation science.

Jennifer is studying Brachaspis robustus with her research focusing on translocation methods and monitoring of the threatened braided-river invertebrate.

In December 2017, Jennifer completed a key component of field work, attaching transmitters to 20 grasshoppers in two different locations. The transmitter research was made possible after her primary supervisor, Dr Murray, was awarded a grant from Holohil systems – a Canadian organisation that builds transmitters to support wildlife research around the world – and a UC strategic grant.

The transmitters emit a beep at a certain radio frequency every three seconds. Using an aerial and radio transceiver, Jennifer was then able to track the grasshoppers for between three and twelve days, depending on the battery life of each transmitter.

“The transmitters were attached to the pronotum – the hard bit of the exoskeleton behind the head – like a backpack,” says Jennifer.

“This has provided us with information on their daily movements, and will allow us to determine what size area they will need for future translocations. It also means we can make estimates about the kind of area we should be implementing mammalian predator control over in order for it to be beneficial. Pairing this study with other parts of our research has meant we have learnt a lot about this species, including about its development and life cycle.”

A passion for conservation led Jennifer to study for a degree in ecology, which led her to find out about the diversity and importance of insects.

“I have a real passion for conservation science and preserving the endemic species of Aotearoa New Zealand. Insect science in conservation is hugely under-represented – I once heard it referred to as the awkward kid sister of conservation – but insects play such an important role in our ecosystems.”

In addition to this work, UC is conducting research into other ways of helping the native grasshopper, Dr Murray says. This includes researching a more accurate means of tracking population changes in response to threats or management actions, and testing another way of tracking the grasshoppers’ movements in the wild to see how they are using their habitat and how large an area they need.

To further protect the endangered species, Dr Murray’s research lab is also conducting a world-first attempt at breeding the grasshoppers in captivity.

“We were given permission to bring six grasshopper pairs into the lab to determine if we can rear them in captivity,” she says.

“If we can, this gives us another tool to use in protecting the remaining populations by providing a means to boost population numbers or provide individuals for translocation to a more protected habitat, without reducing numbers at the source population.”