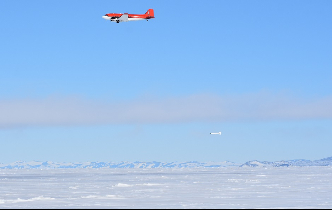 Towed below a DC3 aircraft, the state-of-the-art EM-bird flies 15 metres above Antarctic sea ice. "The EM-bird is the only instrument which can measure the thickness of sea ice remotely," University of Canterbury glaciologist Dr Wolfgang Rack says. Photo credit: P. Langhorne

Our aim is to explore how much sea water is freezing in the Southern ocean every year and how important it is to the global climate, Dr Rack says.

“Sea-ice thickness is the biggest unknown in cryosphere research, because it is so hard to measure. It amazes me how little we know about it, despite its significance for global climate,” he says. “The EM-bird is the only instrument which can measure the thickness of sea ice remotely.”

The 'EM' stands for ElectroMagnetic induction. It is a state-of-the-art technology to remotely measure ice thickness, and it works similar to an induction cook top, Dr Rack says.

“Because sea ice is salty, conventional radar cannot measure thickness, but the EM instrument can, although it needs to be operated close to the surface.”

For the measurements, the research team, called The Icetronauts, used a converted 1942-built DC-3 aeroplane to tow the EM-bird at a height of 15 metres above the Antarctic sea ice.

“We are happy to be the first researchers who have shown that the EM-bird can be operated in Antarctica safely from an aeroplane.”

Field measurements of sea-ice thickness and ocean properties were also made. The data is being used to verify aircraft and satellite measurements to derive ice thickness maps in the Southern Ocean, as part of a PhD study at Gateway Antarctica by UC student Gemma Brett.

“For my PhD, I am using an instrument which is very similar to the EM-bird except it is ground-based – it is sled-mounted and I towed it behind a skidoo across the sea ice,” she says.

The Icetronauts project is being conducted as part of the New Zealand Government’s Deep South National Science Challenge for targeted observations of earth system variables. Project partners include NIWA, York University Toronto, the University of Otago and Antarctica New Zealand.