Dr Sarah Kessans, who recently returned from initial interviews for NASA's Astronaut Candidate Class of 2017, tells us about the best week in her life (so far). 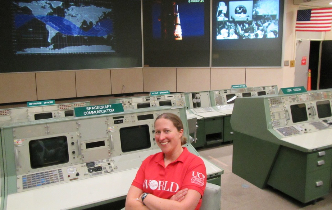 Visiting the historic Mission Control at NASA's Johnson Space Center left UC's Dr Sarah Kessans with a mix of reverence for the past and enthusiasm for the future of space travel.

Dr Sarah Kessans, the postdoctoral fellow at the University of Canterbury who is in the top 1% of applicants shortlisted by NASA to become an astronaut, recently returned from initial interviews for NASA's Astronaut Candidate Class of 2017 in the United States.

Dr Kessans, of the University of Canterbury Chemistry Department’s Biomolecular Interaction Centre, was one of about 120 candidates invited to NASA's Johnson Space Centre (JSC) in Houston, Texas, for initial interviews last month. From that group, 50 applicants will be invited for finalist interviews, after which eight to 14 will be chosen as NASA's 22nd Astronaut Candidate Class, reporting for duty in August 2017.

Whatever the outcome, Dr Kessans has already had plenty of adventure in her 33 years on this planet, including spending 16 hours clinging to a capsized rowboat in the Atlantic Ocean during a 3000-mile race in 2006 before coming back to set a world record for rowing across the Atlantic Ocean in 2008.

We talked to Dr Kessans about the best week in her life (so far) and how it made her feel about her current work and team at the University of Canterbury:

It's hard to explain just how incredible NASA's Johnson Space Center is – both the facilities and, especially, the people. Everyone – from the administrators to the trainers to the engineers to the astronauts – was exceptionally passionate, intelligent, and just really fun. Like a real-life version of the ‘JFK and the janitor’ story. The story goes that when President John F Kennedy was visiting NASA headquarters for the first time in the early '60s, while touring the facility, he introduced himself to a janitor who was mopping the floor and asked him what he did at NASA. The janitor replied, “I’m helping put a man on the moon!”

Everyone there understands that they're a part of something bigger than themselves: part of a massive, inspiring undertaking responsible for exploring our universe, pushing science forward, and really connecting humanity on a global scale. It was humbling to just be amongst it.

What sort of things did you do?

While I'm not at liberty to disclose the details of what we did, the week was fairly similar to initial interviews in previous selection years. We went through lots of medical and psychological testing, a formal hour-long interview, and tours of many of the facilities there at JSC – from Mission Control to the Mock-up facilities, and some spectacular extras via fellow interviewees, a tour of the T-38 training jet hangar and other NASA/US military facilities at Ellington Field.

Also, we had lots of time to interact with the current members of the Astronaut Corps, which was one of my favorite aspects of the week. While the astronauts are some of the most talented people on or off the planet, by chatting with them in their offices and sharing beers with them at the pub, we came to realise that they're just normal human beings like us. Watching videos of them float through the ISS (International Space Station) or seeing pictures of them all over the media makes them seem superhuman, but when you're talking with them as they try to figure out a broken printer, you realise that they have the same hopes, dreams, and frustrations as we all do. Getting to interact with them as they went about their – albeit pretty fascinating – normal daily activities made the possibility of actually joining their ranks seem more achievable.

Were there standard tests like exams or more activity-based team-building type challenges?

A bit of both – NASA really wanted to understand who we are as people and as potential teammates, and the events throughout the week reflected that.

Did it live up to your expectations?

It exceeded all of my expectations – it really was the best week of my life thus far.

I had forgotten how hot and humid it gets back in Houston – it was a bit of a shock coming from winter here in New Zealand. The weather would be something I'd have to get used to again, but I reckon it's a sacrifice I'd be willing to make!

What had the biggest impact on you?

Via one of my fellow interviewees (who is already an engineer at JSC), we had the great honour of experiencing a simulated ascent and entry of the new Orion capsule. I could not believe my luck when one of my fellow interviewees and I were invited to lie down on our backs in the Orion seats. I'll never forget the first time I sat down in a real ocean-rowing seat, and the sense of impending adventure and awe was much the same. Similar to the beginning of my ocean-rowing career, I understand the years of hard work and training that it will take to reach success, much less the starting line, but getting a taste of what that success might feel like was absolutely inspirational. As we were rolled back into the launch/landing positions, with our knees tucked up towards our chests, the control panels in front of our faces, and the windows of the module behind us, we could not hide our massive grins. During the simulation, we were able to see plasma through the windows as the craft re-entered the atmosphere, watch as the parachutes opened, and feel the splash of the capsule as it hit the ocean. The experience allowed us to reflect on our own potential trips to space, and it made the journey – with all of its risks and rewards - seem that much more real. Just being there, experiencing such a unique opportunity with my new friends, solidified my desire to become an astronaut.

What will you remember most from the experience?

Sometimes the simplest moments are the most poignant for me, and as much excitement as I had over the course of the week, one of my very last experiences there at JSC was the most memorable for me. As I was walking back towards the hotel from campus at the end of my last day, one of the current members of the Astronaut Corps pulled up to me in her vehicle and offered me a ride. It was the simplest gesture, but it meant so much to me to have someone whom I hold in such high regard both recognise me and go out of her way to help me out. Our easy conversation during those few minutes, ranging from her training flight that evening and my flight back to New Zealand to the state of traffic in Houston to our mutual love of a local sandwich shop, alleviated any fears which I might have had that I didn't fit in with such an esteemed group of individuals. And while I know that I'm still quite a long ways off from making the final cut, for that brief period of time, I felt as if I was already part of the team, and I can't explain just how proud and humbled that made me feel.

Still keen to go to Mars?

More now than I ever was!

What sort of people were attracted to apply – similar to you or very different?

The other interviewees possessed a wide variety of skills and backgrounds, ranging from military and piloting to engineering to science to a combination thereof. But despite our diverse backgrounds, we all shared a common passion both for space exploration and life in general. We all seemed to love what we do and we were all in agreement that there was really only one reason why we would leave our current professions!

Despite having completely different backgrounds, we all got along extremely well and became very close over the course of the week: sharing stories and encouragement and the stoke of possibly becoming astronauts together. It was quite hard to say goodbye at the end of the week, as evidenced by our last night together, which found us laughing and regaling tales of the week well into the early hours of the morning!

Anything you really loved?

The people! I can't say enough good things about all of the people – both the other interviewees and everyone at NASA. But beyond them, I think one of my favourite parts – apart from the others that I've already mentioned – was getting to sit in the cockpit of one the T-38 training jets.

When I was younger, I really wanted to be a fighter pilot. For better or worse, I fell in love with science and rowing in university, and figured it would be hard to fit a military career in with those two passions. Sitting in the cockpit of a supersonic jet and being that close to realising that dream was almost too good to be true. As with the Orion entry simulation, while we sat in the cockpits with our hands on the controls of the jets, my fellow interviewees and I could actually visualise ourselves as astronaut candidates going out for training flights in the T-38s together, and the joy of that feeling is something that we won't soon forget.

Anything you really didn’t enjoy? Or found challenging?

Time went far too fast! I think the biggest challenge for us interviewees was knowing that only 10% of us will make it to the final cut. We became incredibly close over such a short amount of time, and while we realised that there is only a remote chance of all of us making it, we felt that it would be a shame not to all make it together.

Anything else you want to add?

In addition to everything I learned and experienced, it was great to be able to share with those at NASA how our research here at the University of Canterbury is helping to push science forward and how it could even be applied to projects related to long-duration space exploration in the future.

Regardless of the outcome of this journey, my time there at JSC gave me cause to reflect on how much I value my current research and team here at UC. While the astronauts and everyone at NASA make a phenomenal team, I'm proud to be a part of a similarly cohesive, driven, and fun group here at UC.

It gives me great pleasure to know that whether I'm in Christchurch or in Houston, I'll continue to have a great group supporting me in my career!

Dr Sarah Kessans will find out in December if she’s made it to the next cut of 60 or so finalist interviewees.