Do you prefer your ants cooked medium rare or well done? This question could be coming to a restaurant near you if two Canterbury student-entrepreneurs get their way. 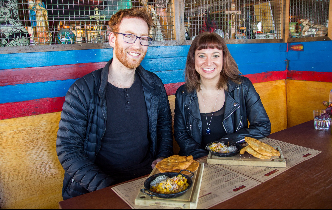 A University of Canterbury Centre for Entrepreneurship (UCE) student company, Anteater, is working with high-end food producers to make delicious dishes from insects to be served in restaurants throughout the country. Anteater student-entrepreneurs Peter Randrup and Bex De Prospo in Mexico Restaurant, Christchurch, which uses their products. Photo: Alan Yeung

Would you like locusts with your huhu grubs? Do you prefer your ants cooked medium rare or well done? These questions could be coming to a restaurant near you if two Canterbury student-entrepreneurs get their way.

A University of Canterbury Centre for Entrepreneurship (UCE) student company, Anteater, is working with high-end food producers to make delicious dishes from insects to be served in restaurants throughout the country.

The Canterbury student-entrepreneurs behind the appropriately named incubator company, Peter Randrup and Bex De Prospo, see their creepy-crawly start-up as a first step towards a more ambitious environmental goal.

“We view this as a first step toward mainstreaming these products as a viable, sustainable alternative to factory-farmed meat,” Peter says.

Peter, who’s studying Insect Biology at UC, says he is committed to finding more efficient, sustainable ways to produce high-quality protein sources. He wants to help people understand how much of an environmental impact that can be made just by small changes in diet.

“My favourite statistic is that if you swapped out just one serving of conventional protein for insect protein once a week, over the course of a year you would free up 100-150sqm of land somewhere on the planet,” he says.

Earlier this year, Peter, a long-term environmental vegetarian with a background in aquaculture, read an article about the emergence of entomophagy (or insect consumption) in Western cultures and saw a big future for this industry in New Zealand.

He pitched the idea at an entrepreneurial event, the 2016 Christchurch Startup Weekend, in April 2016.

Anteater business partner Bex, a logistics and operations manager who’s studying a graduate diploma in Innovation and Entrepreneurship at Ara, attended the event and, after some initial hesitation about the notion of eating insects – “bugs, really?!” – she realised the huge potential behind the idea and jumped on board.

The business quickly snowballed as interest and support grew. Peter and Bex have both left their previous jobs to work on Anteater full-time.

Bex is committed to the environmental side of the business and has stopped eating meat since the bug business launched. She is focused on finding out how to best use the business model to help feed people around the world. She hopes to adapt existing insect-farming models to produce kitset farms which can be sent to residents of impoverished regions and allow them to cheaply and efficiently produce protein sources at home.

“The statistics on how much grain is produced to feed livestock, while the human population in many of these places are left starving, are absolutely staggering,” she says.

Anteater's products are currently on the market throughout New Zealand. As well as at a range of special events throughout the end of 2016 and early 2017, they can be ordered at the following restaurants: