Four UC students have won awards for their youth advocacy work, including Josiah Tualamali'i who won the Supreme Youth Award at the inaugural Canterbury Youth Awards. 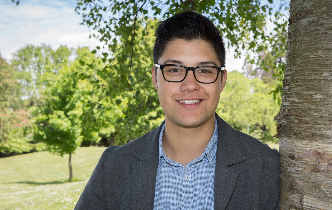 Four UC students have won awards for their youth advocacy work, including Josiah Tualamali'i who won the Supreme Youth Award at the inaugural Canterbury Youth Awards.

Four University of Canterbury students have won awards for their youth advocacy work, including Josiah Tualamali’i who won the Supreme Youth Award for Christchurch at the inaugural Canterbury Youth Awards ceremony, held at the UCSA Events Centre on Friday night.

Organised by Voice Canterbury, the Canterbury Youth Awards recognise young people, aged 12 to 24, who have made an outstanding contribution to their community and had a positive impact on young people in their region.

University of Canterbury (UC) student Josiah Tualamali’i, who is studying for a double degree in Political Science and Law, described the awards as a wonderful way for young people, youth groups and their supporters to celebrate their achievements.

“Over the last five years, our region has been so busy trying to recover, we haven’t had the opportunity to stop and reflect on just how much has been achieved. As chair of PYLAT (Pacific Youth Leadership and Transformation) Council, I have seen the participation and voice of Pacific young people becoming a natural part of youth projects and other issues at the beginning – which makes volunteering all worth it,” Josiah says.

Aged 21, Josiah is involved in several groups and boards, including the United States Embassy Youth Council, he chairs the PYLAT Council and is on the board of Le Va (a public health NGO). He is also a member of the Christchurch City Council’s Multicultural Strategy Group and UC’s Pasifika Strategy Group.

“I was extremely proud to see two of our PYLAT trustees, Wesley Mauafu and Viane Makalio, recognised for their immense service to our community and see them being celebrated. Personally, it was a real honour to receive the Supreme Youth Award for Christchurch. I was really glad that my Dad could be there to see me receive the award, and that leaders in our Pacific community attended as well – it has been only with their guidance and support that we have been able to do this work,” he says.

Canterbury Youth Awards judges described Josiah as a tireless advocate for the voices of Pasifika youth to be heard in decision-making.

“He makes young people feel valued, important and easily demystifies the decision-making process for them. He more often than not is giving his time voluntarily – whether it is coordinating training, writing a submission, or giving his knowledge and expertise at a meeting – Josiah is an upstanding member of his community.”

The inaugural event attracted 83 nominees in 13 categories. Each category had two runners-up and a winner, each receiving Ngāi Tahu Pounamu pendants and cash prizes.

Wesley is studying towards a Bachelor of Engineering with Honours and described the win as “an amazing feeling”.

“Winning the award was very humbling and greatly appreciated, even more so as my mother was there and she doesn't know a lot about what I do in terms of community work,” Wesley says.

“I haven't stopped wearing the pounamu since I received it. It's a great reminder and motivator to keep on serving in whatever capacity I can.”

Viane, who is studying for a Bachelor of Arts majoring in Human Services, is also a UC Pasifika Mentor and an exec member of UC’s Samoan Student’s Association, described winning the Wayne Francis Charitable Trust Leadership Award as an honour.

“This was not won by just me but by everyone who has put up with me, mentored me, told me off, pushed me to be better, my family and my friends. I like to think this one was for them and a special mention to the PYLAT family for always holding it down. Thank you to all of these people for strengthening the core values my parents have taught me: Alofa (Love) and Tautua (service).”

UC Bachelor of Engineering with Honours student Sean Ryan plays an active role in the Hurunui community and is the current chairperson of the Hurunui Youth Council (HYC).

“During his time on the HYC, Sean has led a winning electoral debate against local politicians, carried out district-wide speed testing, established the HYC website, assisted in the organising and running of district-wide events and represented the HYC at regular Canterbury-wide networking meetings,” the judges said.

Runner-up to Viane for the Leadership Award was UC Political Science and History BA student Ashley Stuart, who is actively involved in United Nations Youth NZ at a university, regional and national level. She has been invited to be the first New Zealand representative at the International Rotary Youth Leadership Awards in Washington DC from July 19-24. This week-long leadership course hosts young leaders from 70 different countries in the United States and this will be the first time New Zealand has sent a representative.

UC Bachelor of Social Work student Tayla Reece, 21, is the co-chairperson of Youth Voice Canterbury and one of the organisers of the Canterbury Youth Awards.

“Whether it be at school, at home, through a youth council or a project, youth in Canterbury are doing lots of great stuff and we wanted to give them the opportunity to be recognised for it. Through the Canterbury Youth Awards we hope to create a culture of celebrating young people,” she says.