A UC student will discuss her research into central Canterbury's native freshwater crayfish in an upcoming free seminar. 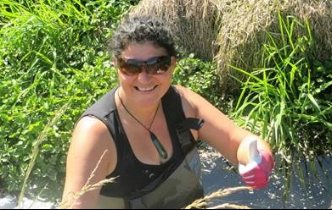 Presenting the NTRC September seminar, Master's student Channell Thoms is investigating management strategies that would ensure sustainability of freshwater resources, and describes herself as passionate about mahinga kai species.

In an upcoming free seminar, a University of Canterbury student will discuss her research into central Canterbury’s native freshwater crayfish, including investigating its distribution, trapping efficiencies and feeding preferences.

Studying at UC’s School of Biological Sciences in the College of Science, with scholarship funding and support from the UC Ngāi Tahu Research Centre (NTRC), Channell Thoms, who is a descendant of Ngāi Tahu from Ngati Kuri hapu with whakapapa to Maungamanu, has just completed her Master’s thesis on freshwater crayfish or kekewai (Paranephrops zealandicus).

Presenting the NTRC September seminar on 29 September, Channell is investigating management strategies that would ensure sustainability of freshwater resources, and describes herself as passionate about mahinga kai species.

“Freshwater crayfish are a taonga species of New Zealand waterways that are highly valued as mahinga kai by many local iwi. Crayfish can also be an important keystone species by acting as bioengineers that create habitats for other species as well as contributing to the maintenance of stream health,” Channell says.

Crayfish are also important in stream food webs, as both grazers and predators that help to shape benthic communities as well as being prey species for larger aquatic animals, she says.

“My research focused on the native South Island crayfish and involved field surveys to determine the occurrence of crayfish in Canterbury streams, testing of alternative sampling techniques and investigating feeding. Comparisons of capture techniques included active and passive methods and also examined the use of both contemporary trapping and traditional tau-kōura.

“My research has identified that kekewai populations are currently declining and that there are biases associated with various capture methods.”

Channell hopes that results from these studies will be used to inform management and restoration projects.

Her research supervisors Professor Islay Marsden and Professor Jon Harding are also part of the Waterways Centre for Freshwater Management which helped fund her costs for the New Zealand Freshwater Sciences conference where she was awarded Best Master’s Oral Presentation.