UC researchers have been the most successful in New Zealand in the MBIE Smart Ideas investment process with five new projects awarded $5 million in funding. 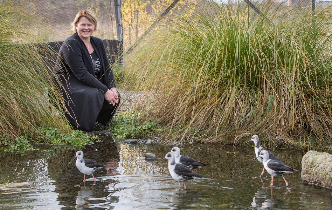 UC researcher Tammy Steeves of Biological Sciences, University of Canterbury, (pictured with kakī/black stilt) has been funded $1 million to research a new approach to maximise genetic diversity in endangered species.

University of Canterbury researchers have been the most successful of all the New Zealand research institutes and universities in the MBIE Smart Ideas investment process, with five new scientific research projects awarded $5 million in funding.

The UC-led initiatives span a range of areas, from developing a battery to directly capture and store solar energy on a large scale at low cost, to developing a genomics approach to select the best individuals to improve conservation efforts via captive breeding programmes.

The capture, storage and recovery of renewable solar energy are major global challenges. This research will develop a solar redox flow battery that could meet these challenges, by directly capturing and storing solar energy on a large scale at low cost.

Over 50% of New Zealand forests are too rugged for a land vehicle-based automatic pruning solution. The goal of this research is to develop a drone capable of autonomously pruning plantation forests.

The waste slag produced by NZ Steel is rich in titanium (Ti). If this Ti could be extracted from the slag, about 37,000 tonnes/year of titanium (Ti) metal could be produced, generating in excess of $700 million in annual revenue.  The goal of this research is to explore ultra-high-temperature electrolytic separation of Ti from NZ Steel waste slag.

Neuromorphic devices mimic the behaviour of the networks of neurons in the brain, using nanoscale switches that emulate synapses. These devices learn from their inputs, providing functionality that is difficult to implement even in software implementations of neural networks. Computers built from neuromorphic devices are expected to be far superior to standard computers in some tasks e.g. image recognition. Having discovered neuromorphic behaviour in simple devices composed of randomly deposited nanoparticles, this research aims to demonstrate the commercial potential of this technology by building and optimising a next generation of more sophisticated devices.

For the recovery programmes of the 400+ species captive bred for release to the wild, including more than 20 such programmes in New Zealand, the most common question asked is: How can we choose the ‘best’ individuals for captive pairing to ensure species have sufficient genetic diversity to adapt to environmental change? This research will develop a forward-thinking, cost-effective and rapid conservation genomics approach that will help conservation managers of poorly-pedigreed populations to make captive pairing decisions.

UC researchers are also involved in a number of bids led by other organisations for new scientific research programmes, part of the MBIE’s Research Programme investment process.

Funding of over $26 million will be invested in idea-driven research through the Smart Ideas investment process. Smart Ideas initiatives catalyse and rapidly test promising, innovative research ideas, and contracts are awarded for two to three years.