The University of Canterbury has just opened a newly constructed high-end test hall that will place the University on the world stage for earthquake engineering research. 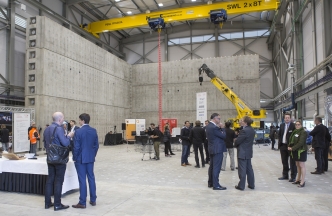 The SEL's strong floor is 2m deep, the reaction wall is 1.6m thick and together they contain 3607 anchor points which allow such structures to be bolted onto them. These structures can then be loaded through hydraulic rams in a variety of ways to simulate earthquakes.

The University of Canterbury has opened a newly constructed high-end test hall that will place the University on the world stage for earthquake engineering research.

The Structural Engineering Laboratory (SEL) took over a year to complete and required technical expertise from a wide range of consultants, contractors and top civil engineers working collaboratively to deliver the highly complex and challenging project.

Professor Des Bull, practicing engineer and Adjunct Professor for UC’s Civil and Natural Engineering department says, “This was a hellishly technical build – well outside what normal contractors are required to do. Not just in the design, but in terms of managing the materials, the delivery and the construction.”

Comprising a 500sqm strong floor and a 9m high L-shaped reaction wall 29m long, the test hall is designed to take a large two to three-storey structure up to 12m wide and around 18m long.

The strong floor is 2m deep, the reaction wall is 1.6m thick and together they contain 3607 anchor points which allow such structures to be bolted onto them.  These structures can then be loaded through hydraulic rams in a variety of ways to simulate earthquakes.

“There is an extraordinary amount of material in this building,” says Professor Bull. “There’s 400 tonnes of reinforcing steel and 1440 cubic metres of concrete in both the floor and wall, with an extra 32 tonnes of weight in the anchor-point assemblies alone.

“These assemblies had to be laid to an accuracy of 2mm in three dimensions and then a variety of concrete mixes used to ensure an easy flow through the reinforcing cages, requisite strength and low heat during curing. The floor took 12 hours to pour and used 3 pumps, 178 concrete trucks and 47 men.

“So it required a feat of logistics alongside high precision engineering to complete this building to a standard that would satisfy the University’s needs, and it couldn’t have done that better.”

“The building will make a huge difference to our research capabilities. In the past we have been restricted to testing small parts of structures – a beam and a column together, or a small part of a single wall. We could also only test in two dimensions by pushing off a wall alone.

“In this facility, we can not only test large portions of, or entire buildings but also in three dimensions. This will show us what happens when everything starts to interact under stress and opens up a whole new area of learning. With the corner produced by the L-shaped wall, we can also load in different directions, allowing us to mimic earthquakes in a really realistic way.”

Professor Bull says some of the research to be done in the new building will have real-world impact for New Zealand.

“Initially we’ll be focusing on many of the questions generated by the Royal Commission after the Canterbury earthquakes. Then we envisage using bigger structures to test some of the retrofit details suggested for New Zealand buildings as well as the low-damage building systems being designed, both of which can only really be validated by loading a big building in a large test hall.

“All the work will be in response to the needs of the New Zealand community which became so critical following the 2010 and 2011 events.”

There is already 18 months of research projects booked into the SEL, and a great deal of interest from international organisations, both to use the testing facilities or around the potential to invest in its future development.