UC College of Science Pro-Vice-Chancellor Professor Wendy Lawson has received national recognition for her longstanding support for the geospatial sector in New Zealand. 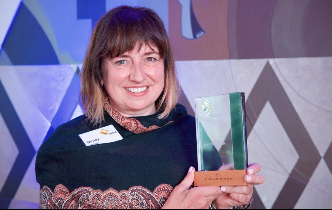 The University of Canterbury's College of Science Pro-Vice-Chancellor Professor Wendy Lawson won the Professional of the Year Award at the New Zealand Spatial Excellence Awards held at Te Papa Tongarewa in Wellington recently.

The University of Canterbury’s College of Science Pro-Vice-Chancellor Professor Wendy Lawson has received national recognition for her longstanding commitment to growing the geospatial sector in New Zealand, advocacy and partnership building.

Prof Lawson says it was an honour to receive the award.

“I have consistently and passionately championed the geospatial cause over many years, and I suspect my unconditional and enthusiastic geospatial evangelism is part of the judge’s decision to honour me with this award”.

In making the announcement, the judges – a panel of industry and government representatives – recognised Prof Lawson for her advocacy of the geospatial industry.

“Professor Wendy Lawson has been one of the most influential people in the Geospatial Education and Research areas within New Zealand,” the judges said in their citation.

“She has championed the development of geospatial research and education as well as all levels of government and private industry, both national and international. Her drive has led to the establishment of a range of innovations in geospatial research, and she has maintained that commitment throughout her roles at the University of Canterbury – from Head of Department of Geography to Pro-Vice-Chancellor of Science.”

Prof Lawson is currently Chair of the Melbourne-based Cooperative Research Centre for Spatial Information (CRCSI) Research and Education College group – an international research and development centre, and most recently she was a key driver behind the establishment of the new Geospatial Research Institute Toi Hangarau based at UC.